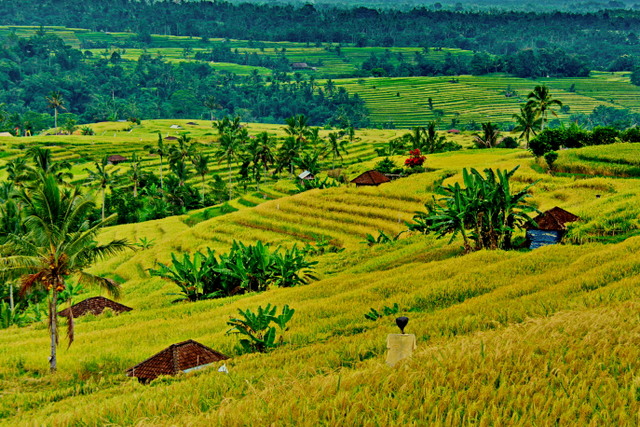 Bali, Indonesia has a blend of culture,architecture and beautiful beaches which makes it a perfect place for tourists from elsewhere to visit. Beyond the popular tourist spots like Kuta, the people’s lives for ages have been defined by their cultural heritage including their religion. I had traveled to Bali as part of my Indonesian trip in May of 2015 and was fascinated by the religious practices of the Balinese. More than 95% of the people from the island of Bali practice Hinduism. Their culture has been preserved for centuries  since the introduction of Hinduism around the 5th Century AD from India and later through the remnants of the defeated Majapahit empire though Hinduism in India has undergone significant changes due to the competition from other faiths. In fact, I believe that Bali hinduism has many Vedic practices retained when compared to the Indian Hinduism. In this travelogue, I will be covering some Balinese cultural heritage. And do note that my attempt at writing about their culture is similar to the story of the blind men and the elephant.

Religion plays a significant part in the everyday lives of Balinese. Every day morning, I witnessed the Balinese perform Sembahyang (Puja in India) with offerings (called Canang Sari) in their shops or to the idols of Gods and empty thrones (representing Lord Widi Wasa covered later in detail) on the streets and roads. So I will start with the background of the Hinduism practiced in Bali. The Hinduism in Bali is a mix of animism, ancestor worship and Hinduism of India. The Bali Hinduism has even borrowed some of the Buddhist belief (centuries ago Buddhism was the majority religion in Indonesia though the island of Bali always preserved the Hindu religion). Their primary almighty is Ida Sang Hyang Widi Wasa or Acintya and all the gods they pray to primarily,  Brahma, Vishnu and Siva along with Saraswati and Ganesha are all believed to be the manifestation of the primary almighty, Widi Wasa. Though many people have the idea that Indonesian Hinduism is different from Indian Hinduism, Widi Wasa is none but Brahman (the highest Universal Principle) in India (not to be confused with one of the Trimurthys – Brahma) . Widi Wasa became popular since 1950s after Indonesian Govt through “Panchasila”(different from Indian Panchsheel, 5 principles signed between India and China during Nehru period) recognized only monotheism and wanted all people to identify with one of the monotheistic religions. Balinese in 1950s consulted the Indian Govt. and together strengthened the concept of Widi Wasa gaining recognition for Hinduism. Widi Wasa is presented in empty throne or Padmasana on the streetsides and temples of Bali today. Other gods such as Ganesh could be seen everywhere while Trimurthys are depicted in the temples. Tenggerese in Eastern Java have similar beliefs and is covered in this blog – Mount Bromo

Another cultural heritage is the Subak system. Bali culture is made up of rice,water and the social system called Subak and these three are firmly intertwined with the Bali temple culture. And the Subak system epitomizes the philosophy of Tri Hita Karana – philosophy of harmony among humans, harmony with God and harmony with nature.  Subak is a traditional irrigation system of Bali which is a blend of technology and philosophy. Water from the lakes and springs pass through the Bali temples of various sizes before it reaches the terraced rice fields thus providing the tie-up between the agrarian community (who form 90% of the Bali population) and the Bali temples. And Subak system provides that organic cultivation where the farmers avoid pesticides and fertilizers due to the lands being considered sacred. Subak system covers 20000 hectares of rice fields and 5 rice terraces and was declared a UNESCO site in 2012.

Nyepi is the day of silence and is marked by silence, fasting and meditation. It is observed from 6 am to 6 am the next day. This is the day of introspection for most Balinese. The streets are empty and no sounds are heard. The tourists are expected to stay within the confines of their hotel. This day coincides with the Ugadi festival in India and normally it is in March or April and signifies the beginning of the new lunar year.

Ngaben is the Balinese cremation ceremony of the deceased. Cremation ceremony is very elaborate and expensive that the dead is buried initially in a coffin and may take years before they are cremated in a temple called Prajapati once the Balinese have enough money to spend for the ceremony. Shown here are the buried dead and the cremation tables in Pura Prajapati in Ubud Monkey temple where the cremation ritual is conducted for the deceased masses every 5 years.

Puputan is the ritualistic suicide behind Bali being a popular tourist destination. In 1906, Dutch attacked Kingdom of Badung, Bali and reached the palace at Denpasar when the King emerged from the palace along with 400 followers including wives,children and priests all dressed in white  symbolizing the death ceremony, in a silent procession. Once they came out, they started stabbing each other instead of surrendering to the Dutch. The Dutch soldiers were stunned as the deaths mounted and many threw jewels at the startled Dutch. The king himself was stabbed by the chief priest and ultimately all the 400 died. Another 2 Puputans happened in Tabanan and Klungkung in 1908. These brave Puputans (literally meaning the end) made a serious dent on the image of the Dutch colonists back home who strived to protect the Balinese culture to salvage their reputation through Dutch Ethical Policy. The preservation of the culture unlike South America is the reason Bali has emerged as a popular destination for travelers.

And it would sound more cliche especially as it is located in the SE Asian region – Indian epics of Ramayana and Mahabaratha are part of their culture and you would sense it immediately once you get out of the Denpasar International airport with giant statues of the Mahabaratha characters placed on different roads. Needless to say, the temples are adorned with scenes with Ramayana and even in the palace of Ubud one can see Mahabaratha scenes depicted.

15 thoughts on “Culture and Belief of Balinese”