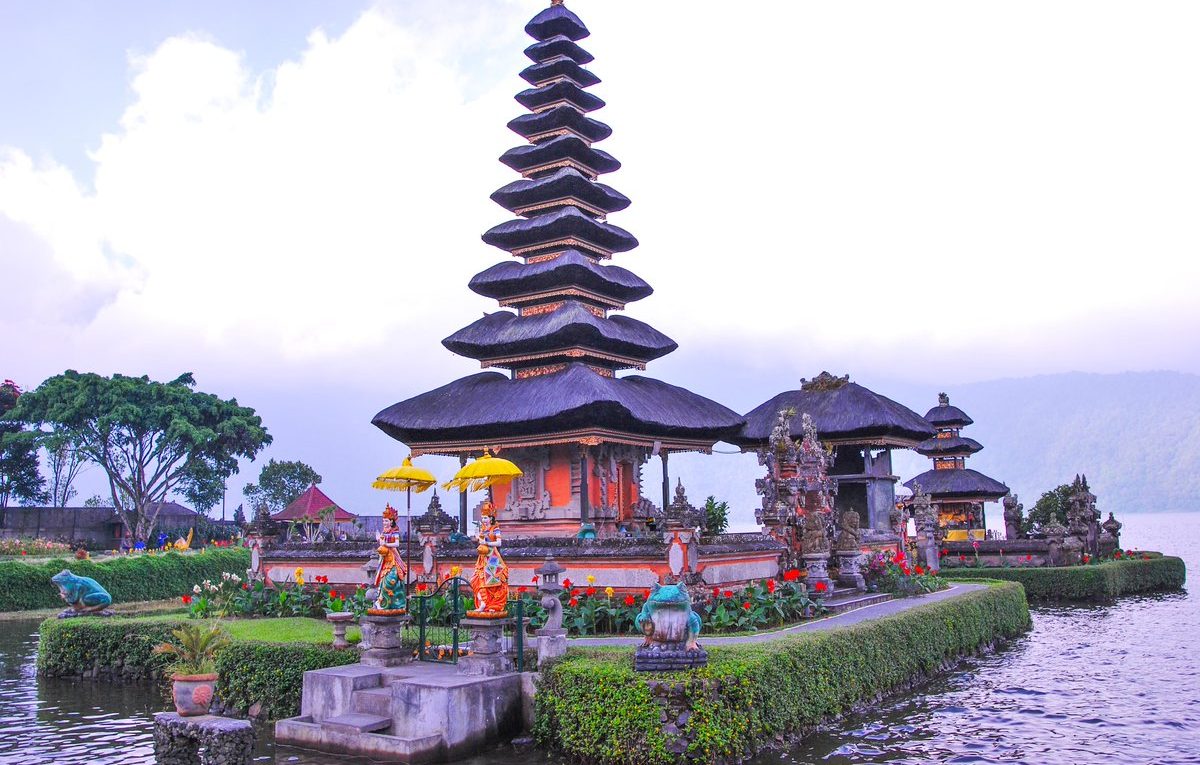 I had traveled to Bali in 2015 to explore the island along with the island of Java. Though Bali is known for its exotic beaches, the cultural aspect of Bali is what excited me as it has a close connection with India through the religion. Apart from the beaches, the rice terraces of Bali with its green paddy fields in standing in water is a sight to behold.

To provide the background, rice cultivation in Bali dates back to more than 2000 years. Rice is the staple food of Balinese and plays a cultural and religious role. There are primarily 3 varieties of rice, Ketan or white sticky glutinous rice, Injin or black (more of dark purple in color) glutinous rice used for desserts and Barak or red rice used primarily in temple offerings. These strains are called as Padi Bali, the word Padi coming from English word, paddy.

The 4th one, yellow rice is not cultivated. Legend has it that Lord Siva sent a bird to deliver the rice to the Balinese people. But the bird ate most of the yellow rice during its flight leaving only some residue. The bird planted the residue under the eaves of its house and the grain grew into the turmeric. Thus, the Balinese do not grow yellow rice. Balinese make yellow rice by mixing turmeric & water with white rice which is similar to what people of India do too.

Colors hold religious relevance to Balinese. Red symbolizes Brahma, white symbolizes Vishnu and black, Siva, These 3 gods are the Trimurthys in the Hindu religion. The coincidence between the colors of rice grown and the 3 Gods is intriguing though there is no explanation behind it.

Balinese venerate Goddess, Dewi Sri. She is the goddess of rice fields and fertility. They offer their prayers to her every day. On special occasions, they make small figures of her using rice and perform ceremonies. For example, during the rice harvest, they make small figure of her using rice and place it at the location where the water enters the rice fields for irrigation and pray to her.

Bali agricultural practice  is made up of rice,water and the social system called Subak. These are firmly intertwined with the Bali Hindu temples. And the Subak system epitomizes the philosophy of Tri Hita Karana – philosophy of harmony among humans, harmony with God and harmony with nature.  This philosophy is part of the everyday lives of Balinese. Subak is the traditional irrigation system of Bali which is a blend of technology and philosophy. Water from the lakes and springs pass through a sophisticated maze of canals and  Bali temples of various sizes before it reaches the terraced rice fields thus providing the tie-up between the agrarian community (who form 90% of the Bali population) and the Bali temples. The rice fields are organized as terraces to take advantage of the gravity in the irrigation of the water. Subak system covers 20000 hectares of rice fields and 5 rice terraces. The system itself is associated with the rice goddess, Dewi Sri and water goddess, Dewi Danu. The temple dedicated to Dewi Danu is Pura Ulun Danu, located on the shore of Lake Beratan, which is formed in a volcanic crater of Mount Bedugul. This is one of the supreme water bodies of Bali taking part in the Subak system.

Subak had achieved a balance between water sharing and pest control of the rice fields of different farmers over the centuries. Farmers take turns growing rice in a ritualized cycle coinciding with Balinese 210-day calendar, Pawukon. During rainy season, cultivation happens simultaneously across the rice fields. But during the dry season, water supply is managed on a rotational basis called nyorog. As stated before, rice fields are organized in the form of terraces, some of them have become a tourist attraction in the recent times, especially the rice terraces of Ubud. The principle of nyorog involves the upstream fields getting the water first, next the midstream fields and the last would be the downstream paddy fields. The Subak system also promotes fallow periods of rice cultivation. The standing waters of rice fields see an increase in insect and rat populations as well as crop diseases. To control those pests, fallow periods are practiced. During the fallow season dry crops such as peanuts and chilli peppers are grown. This needed careful coordination among farmers and this is where temples with their groups of farmers came in. Thus, a coordinated approach of water sharing & fallow periods perfected over centuries worked well for Balinese in their water management and pest control.

The Bali rice fields is also a vital source of protein for the Balinese. The Bali rice fields with the standing waters are home to fishes, eels and frogs. They also support ducks which in turn eat the insects and the left over grains. The fields, post-harvest, were either burnt and soaked under the water with the leftover stalks allowed to decompose providing rich nutrients to the soil.

The traditional rice strains of Bali is collectively called the Padi Bali. The crop takes 210 days from the time it was planted to the time it gets harvested, which coincides with the Balinese calendar, Pawukon. The rice introduced as part of the Green Revolution was IR8 developed by the International Rice Research Institute in Philippines., It was introduced not just in Bali but all over Asia including India. It was a high yielding rice. The total harvesting time was reduced to just 4 months or roughly 120 days.

But there was one problem with the IR-8 in that it was susceptible to pests, especially Planthopper. In 1977,  2 million tons of rice was destroyed by the pests in Bali. Additionally, the rice cultivation required extensive use of chemical fertilizers and pesticides.

Subsequently, another rice, IR36 was introduced, which was resistant to planthopper. But it posed a new problem in that it was susceptible to a viral disease called Tungro. Again a new “improved” strain called PB-50 was introduced. But this strain was afflicted by a fungus, Helminthosporium Oryzae. Interestingly, a study done by 3 Indian scientists on the use of cow urine which proved effecive in the control the disease exists but I digress. The weirs or diversionary dams, which were part of Subak system were used as additional agricultural fields. The temple rituals no longer synchronized with the stages of farming of rice. The Balinese cropping calendar was abandoned due to the introduction of short rotation of IR8 and its cousins.

The use of chemical fertilizers and pesticides killed vital protein sources of eels, fishes and frogs. Many Balinese showed signs of malnutrition due to this reason. The  constant struggle between water management and pest management persisted and the effects became more profound during dry season. . The effects of Green revolution were devastating in that the supply of water became unpredictable and explosions of pest populations surfaced.

Anthropologist Stephen Lansing around 1995, looked at the different ways of organizing the cropping patterns and found that the Subak intrinsically managed the system better than the Green Revolution’s uncoordinated planting where every farmer was left to himself with an inefficient centralized government control. The “new and improved policy” of the Green Revolution proved a failure compared to the traditional system of Subak.

Bali returned to the original system of water temple network based irrigation subsequently. Subak proved that the socio-ecological balance and the connection with the biosphere is vital. Balinese showed the world that religious cosmology & local customs in perfect harmomy with nature can trump a “scientific approach”. A vital lesson for Indians especially to learn from where animal NGOs try to wreak havoc on traditional animal welfare practices of Jallikattu and Kambala. Subak also teaches a vital lesson of coordination to handle the COVID19 situation better to get the pandemic under control. The control of pest was achieved through the “flatten the curve” model with the centuries old practice of fallow periods instead of the predominant use of pesticides and insecticides.

In 2012, Subak system was recognized as a UNESCO World Heritage.