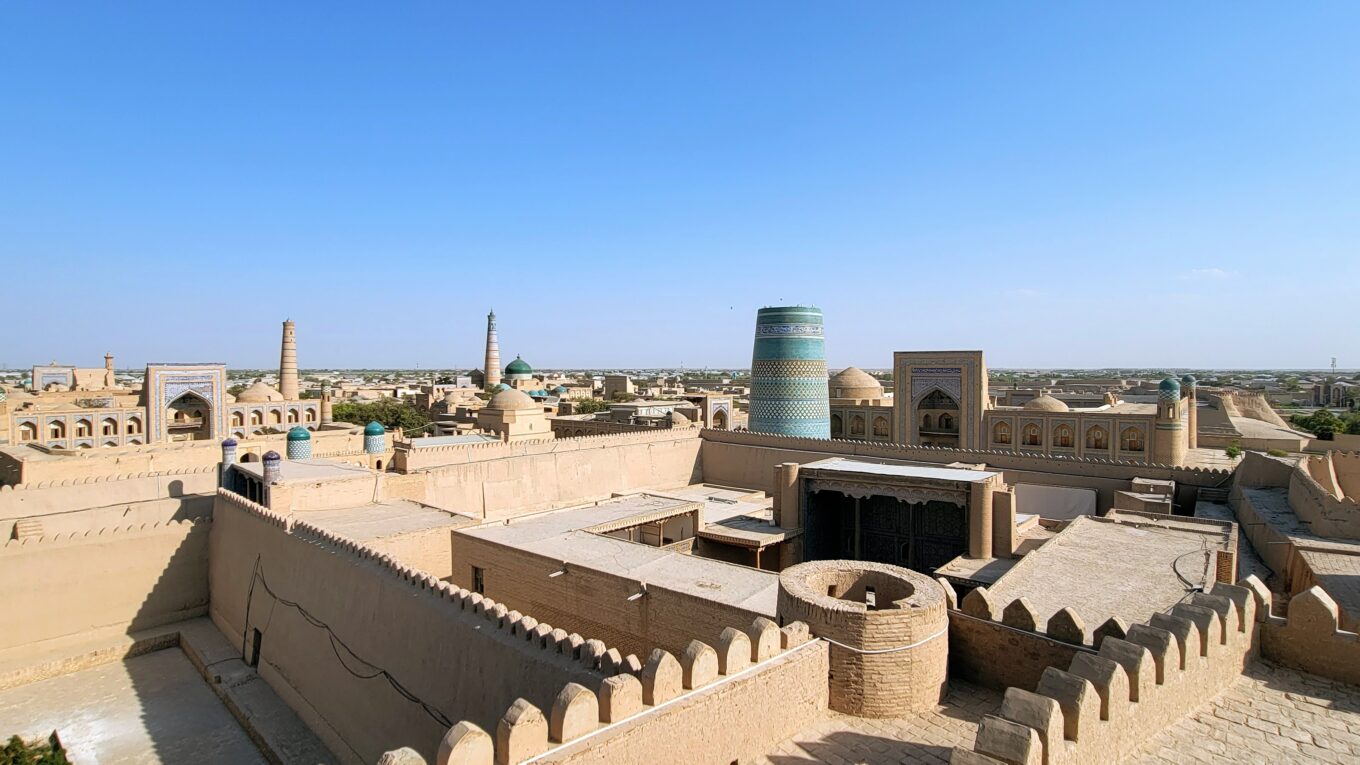 The city has an ancient feel with mud houses within the fortress. It is sandwiched between 2 deserts, Kyzylkum and Karakum. And the place is hot. Walking around gets you the feeling of being in the 15th, 16th centuries. I was there in July of 2021  and the weather was extremely hot. The city was running  thin with barely 1 or 2 tourists which made me feel I had reached the end of the world. This is the city of Khiva in Uzbekistan near the border of Turkmenistan.

Khiva has lots of history,  having been built and rebuilt several times in the history. It has a sordid part as well. The city was located in the Old Silk Road with Caravans with slaves being carried in  the 17th and 19th centuries for trade in this city. 1 million Persians and innumerable Russians were sold here.

What followed was one of the bloodiest reprisals by Genghiz. Cities were laid waste including Samarkand,  Bukhara. Shah was chased all across the empire and he died in the Caspian sea due to sickness. His son, Jalaluddin Khwarazmshah was defeated in the Battle of Indus in India. He however was able to cross the river Indus and briefly ruled Punjab.

The city of Khiva is split into 2 parts – the  inner city surrounded by brick walls is called Ithchan kala – this is where you want to be to get a piece of history. The walls and most of the buildings were  built by the slaves.This place is ancient with lots of minarets.  About 50 historical monuments and 200 plus mud houses survive today. There is a 10th century mosque called Jhuma mosque which has been continuously renovated.  The people here were dressed in modern attire in contrast to the city. Locals mentioned that the people are religious but not overt unlike Ferghana Valley (place of birth of the Mughal Empire founder, Babur)

I spoke to a few locals. One stated that they have kin who speak the same dialect, Khwarezmian of Uzbek language across the border in Turkmenistan. They get a maximum 3 day visa to visit them. Foreigners get more days.Khwarezm was part of the Soviet Union, which broke the region & gave the former capital of Khwarezm empire, Konye-Urgench to Turkmenistan. Thus the kin were separated between Uzbekistan and Turkmenistan.

How to get there?

Khiva is at the border of Uzbekistan and there are 3 ways to get there.

Take a train to Bukhara to Khiva. There is one train which goes from Bukhara to Khiva everyday.  Do download the Uzbekistan Railway app ( Uzrailway tickets app) in Google Play Store or Apple store and make reservations. This is how I traveled. This takes about 6 ½ hours for the overall travel.

The other way is to take a shared taxi from Kharvan bazaar in Bukhara. It takes about 7 hours.

The third way is to  fly from Tashkent to Urgench, a city which is 20 miles away from Khiva and take a taxi to Khiva from Urgench.

The best place to be is in one of the Bed and Breakfast places in the inner city. This allows for walking inside the city in the mornings and evenings. I stayed at the  Meros B&B, The Meros B & B is located inside the baked mud walls of ancient Khiva, not far from the western gate. This is the place to be as it offers a stunning view of the inner city.

There are modern luxurious hotels outside of Ichan Kala if one prefers luxury.

There are lots of eateries with delicious breads, kebabs and other dishes. Highly recommend trying the fish here (it was a recommendation from a local girl) as the waters of Khiva are salty making the fish extra delicious.