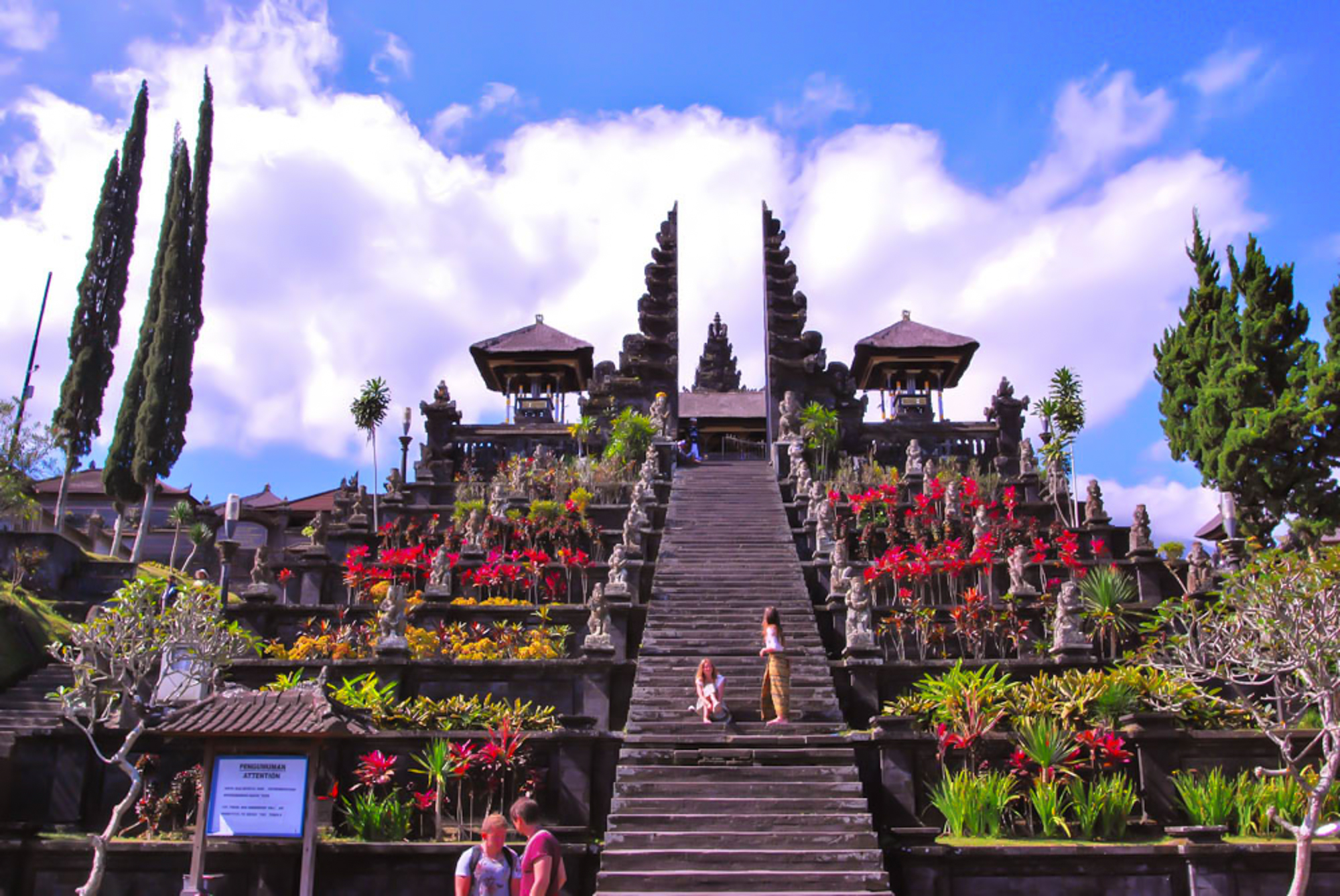 “It is not the place you would want to visit” said my 21 year old taxi driver, Adi. I asked him for a reason afraid that he is going to confirm the warning what I read online about Pura Besakih. He said “Touts there will hound you”. But that warning became untrue for me. But that did not mean I had a good time at Pura Besakih. It left a lingering bad taste in my mind.

Pura Besakih in Bali, indonesia, is the mother temple for Balinese Hindus and travelers should visit this place for its opulence. But I realized that if you are a non-Balinese Hindu, you need to set aside any expectations of spiritual experience here.

I had traveled to Bali, Indonesia in May 2015 with Hema. Prior to that, I had done by research about various places to see in Bali. And Pura Besakih stood out as a must see place along with Pura Uluwatu and Pura Tanah Lot. But the horror stories about Besakih stood out as well as part of my research. But I wanted to see the temple for its majestic presence on the slopes of Mount Agung Volcano and had miraculously survived the Volcanic eruptions of Mount Agung in 1963 by few meters. Balinese believe that is the demonstration from Gods to showcase their power but does not want to destroy the temple. Also they believe Mount Agung is the Mount Meru, a sacred mountain for 3 different Dharmic religions, Hinduism, Buddhism and Jainism. The belief is Mount Meru was brought by Lord Shiva and placed it in Bali.

Besakih is a temple complex of 23 different temples. Each temple has Pelinggihs or Merus(pyramidal structure typical of Bali architecture representing Mount Meru). These temples are in parallel ridges offering a panoramic view.

The temple typically has the Mandala style of architecture. Mandala style is the ancient Hindu style of architecture followed in many Indian, Balinese and Javanese temples. It opens up to split gates or Candi Bentar leading to the Madhya Mandala(middle courtyard) from Nista Mandala (outer courtyard) . The Madhya Mandala (middle courtyard) leads to the Uttama Mandala (inner courtyard), through a Padukaraksa style gate(gate with roof) called Kori Agung. The Uttama Mandala is where the Padmasana is located.

This temple goes back to 2000 years but was used as a Hindu temple since 13th century. The Pelinggihs were added in the 14th century due to the influence of Hindu Majapahit Kingdom from the neighboring island of Java.

Armed with this knowledge, I went to the ticket counter and bought ticket for Pura Besakih.  I saw groups of touts sitting near the counter asking me to hire them as guides. That is where all my research came in handy. I mentioned to them I knew of the background and significance of Besakih and its history as I am an Indian Hindu and it is not a tourist visit for me but rather a spiritual and cultural exploration. Not sure whether that convinced them but I felt they identified themselves with me as a fellow Hindu and did not bother much. Having crossed the  major hurdle, I was relieved and walked to the temple. After walking about 200 meters(600 feet), the view of Pura Besakih unfolded and I was stunned by its beauty. It was as majestic and huge as any South Indian Hindu temple if not more.  And with the Mount Agung with its lenticular clouds in the background, it was a sight to behold.

Hema and I started climbing up the stairs on the ridge and started visiting various temples. That is when I had 3 distinct bad experiences. We entered a temple after reading the signs that non-Hindus are not welcome. Hema and I being Hindus entered the temple but was asked by a priest to not to come in. I protested saying that I am an Indian Hindu and have come to pray. But he refused entry. Which Hindu priest will not want you inside the temple to pray to God? Even after one had identified himself as a Hindu? My mind started thinking about the period before the 8th century in India when rituals in the temple were the only way to communicate with the God. Nayanar and Alwar saints of the Bhakti movement showed another way to Hindus i.e. talk or sing to God in vernacular languages instead of just Vedic rituals which revived the Hinduism in India in the 7th century CE. Amidst the disquietness, my mind had achieved the clarity. I walked away, a little composed, to the top of the Pura Besakih and was welcomed by the priest (in that temple). He performed the Pooja and I placed $100,000 Rupiah note ( about 7 USD) in the Aarthi plate. But he started demanding money from Hema. Disappointed, I came out after I refused to give him money saying the money was meant for both of us. I wouldn’t mind proiding money to the archakas (priests) but that is something I would prefer doing voluntarily and not being forced.  I realized that the place is commercialized and had started showing the dark underbelly.  I started the climb down resolved not to buy even Canang Sari (Balinese offerings basket) as I was indignant that I do not need to offer anything to my Gods and just my sincere prayer is enough. I walked into the center of Pura Penataran Agung and that is when I had my third bad experience. I saw Hindu priests of the temple indulging groups of Australians and other tourists while Hema and I were not offered any prasad (whereas in Indian Hindu temples, the priests irrespective of the person or the age will offer prasad of either saffron or ash without an iota of expectation) . We prayed to the Gods there and walked out very disappointed.

Still I would refrain from painting the entire Bali Hinduism with a single brush of negativity. And it would be unfair to do that as this was the only place I faced such a disappointment. But I was truly astounded by the commercialization which exists there being the Mother temple.
I realized I had eschewed my rule of travel, which is to cherish every good experience coming your way. If it is a bad experience discard it after distilling the lessons from it. But this particular one has stayed with me even after 9 months of visiting the place. It sticks out in my mind like a red dot in the white sweater in an episode of Seinfeld. But do note I have written this to  set the expectations for my readers so they may not be disappointed but can cherish the beauty of this temple.

Do your research about Besakih and appear knowledgeable to avoid the mafia of touts. Also carry a Sarong as one have to wear it compulsorily to enter the temple.