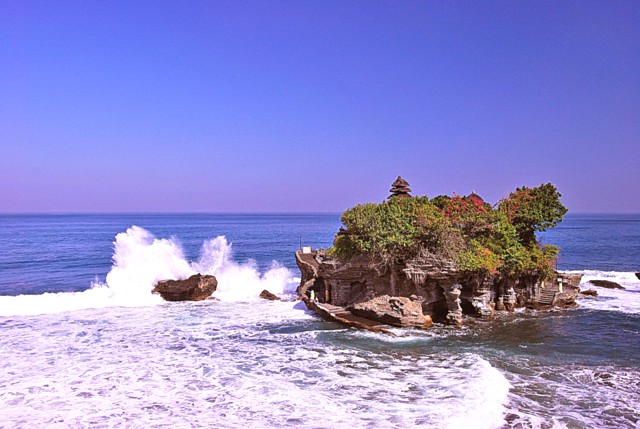 The temples of Bali are called Pura temples. Indonesian temples are of 3 kinds – Pura, Candi and Koil. The Candi temples are more of Javanese temples e.g Candi Prambanan while Koil are those temples constructed by Indian traders from Tamilnadu, India e.g. Mariamman Koil in Aceh in the 19th century. The third type of temples are the ones constructed by the Balinese and Tengeresse in Eastern Java e.g Pura Luhur Poten in Mount Bromo.

With the kind of influence the temples exert on every day lives of the Balinese, each village in Bali will have a minimum of 3 temples – for each of the Murthys in Hindu religion namely, Brahma(temple called Pura Puseh to represent origin of life as Brahma is the creator of life) , Vishnu(temple called Pura Desa to represent flourishing life as Vishnu is the preserver of life)  and Siva(temple called Pura Dalem to represent death as Lord Siva is the destroyer) . And therefore if one had to travel in Bali, you will see temples in every street and road. No wonder Bali is called “Land of 1000 temples”. I am not dwelling into the influence of temples from a socio-cultural angle which I have dealt with in detail in this blog

In this series spread over several articles, I am going to cover some of the famous temples in Bali, which I happened to visit as part of my Indonesian trip in May 2015.

A scenic hindu temple perched on a rock amidst the sea and making it a photographer’s paradise. The temple is about 15 miles from Denpasar in Tabanan regency and I recommend renting a scooter which would cost about $5 USD per day to visit the temple. Do carry International riding permits and motorcycle license from your country. The best time to visit Pura Tanah Lot is during the sunset but be warned that this is time when the temple is filled with tourists.

The main deity is Dewa Baruna or sea god. The temple is accessible only during lowtides. There are other shore temples like Penyawang near Tanah Lot. Nevertheless this temple is one of the 7 sea temples and a must see place in Bali and the visual treat it offers is something out of the ordinary.

Legend has it that this temple was constructed by Dang Hyang Nirarth, founder of the Saivite priesthood in Bali, in the 15th century. He traveled from the Majapahit Kingdom in Java in the 15th century after the Islamic forces conquered most of the Java and many Hindus were forced to locate (some located to Probolinggo and villages around Mount Bromo – covered in this blog ). He traveled in a giant Pumpkin using his magical powers after the boat he traveled,  developed leaks.So till day Brahmins of Bali do not eat Pumpkins. He landed in the rock of what is today the Tanah Lot temple and meditated and preached to the nearby villagers. He encountered resistance from the local chief but showcased his magical powers by moving the rock into the sea and having sea snakes to protect the rocks, which impressed the chief, who along with his followers started following the priest. The priest presented the chief with a holy dagger which is with the Kediri royal palace.

The temple started to collapse in 1980 and was restored with a funding of about $100 million from the Japanese Government. There are 7 other temples near There are 8 other temples near Tanah Lot. Those are Pura Penataran, Pura Batu Mejan,  Pura Pakengundan, Tri Ankata Monument, Pura Jero Kandang, Pura Penyawang, Pura Enjung Galuh, Pura Pentaran, Pura Batu Bolong. There are shops around the temple where we observed that the vendors were not pushy and prices seemed reasonable. Also there is a 5 star golf course nearby called Nirvana golf course located near the waters for golf aficionados. At 6 pm everyday, there is a Kecak dance performance in the open air theater.