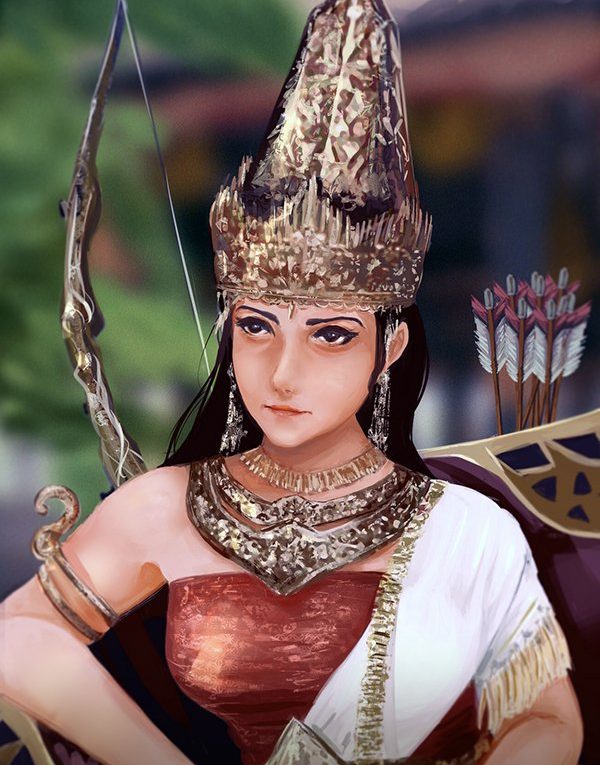 Many Indians know that the Indian epics of Ramayana/Mahabharata are part of the culture in South East Asia, especially in Indonesia and Sanskritized names are very common in these regions though the people practice a different religion.  “Farther India” is the term used by western historians & archaeologists to denote the Indian connection with South East Asian countries since ancient times & a peaceful spread of Indian culture unlike Chinese who enforced theirs as invaders.

To provide the background, Indian culture did not spread directly to many places in South East Asia. The Majapahit empire was primarily responsible for spreading the Indian culture in these parts.  Bali, Java, Malaysia retain some of the Indic legacy today because of this very reason. The period is considered a golden age in Indonesia that later Islamic rulers who ruled these parts competed to establish a lineage to Majapahit royals.

But more fascinating is that the golden age of the empire coincided with the rule of a brave queen, Tribhuwana Wijayatunggadewi or Gitarja.  Queen Tribhuwana with the help of dynamic PM, Gajah Mada expanded the empire greatly & spread the Indic culture in Bali & other places as part of the conquests.

This article discusses her legacy which arguably positions her as the Greatest Queen in the history of Indian/Indianized empires in the world.

Queen Tribhuwana was the daughter of the founder of the Majapahit empire, Raden Wijaya who assumed the name, Kritarajasa Jayawardhana and ruled between 1294 and 1309 after fighting the great Mongol, Kublai Khan’s forces & threw them out of Java in 1293. He established Trowulan near modern Surabaya in Eastern Java as his capital.

He was succeeded by his son, Jayanagara who ruled the empire between 1309 and 1328. He was murdered under mysterious circumstances in 1328. He did not leave an heir and was supposed to be succeeded by his mother, Gayathri (Rajapathni Gayathri is how she is called – Rajapathni means Empress). But she had become a Bhikkuni (Buddhist monk) by then. She asked her daughter, Gitarja, who was a half-sister to Jayanagara to rule instead.

Gitarja ascended the throne as Tribhuwana Wijayatunggadewi (Tribhuwannottunggadewi Jayawishnuwardhani – goddess of the 3 worlds where Vishnu’s glory spreads) under the auspices of her mother Gayathri. As was the prevalent practice then, she could not ascend the throne directly. She started her reign with suppressing the rebellions in the regions of Sadeng and Keta in Central Java around 1331. She personally led the armies along with her cousin, Adityawarman in these battles. Adityawarman would later become the king of Malayapura in Sumatra.

Gitarja’s period also saw the rise of another warrior, Gajah Mada who became the Mahapatih (equivalent of Prime Minister) in 1328. Little history is known about him before that except he saved the king Jayanagara against a rebellion led by a Majapahit noble, Rakrian Kuti in 1321. Gajah Mada, then was the head of the elite royal guards called Bhayangkara (Bhayangkara is something which instills fear in Sanskrit).  In 1331, he pledged Palappa oath until Nusantara (South East Asia especially Indonesia/Malaysia) was conquered. There are different interpretations of the Palappa oath by the historians. Some attribute it to his liking of Palappam (a breakfast dish popular in Kerala/Tamilnadu). But the most viable explanation is that Gajah Mada was a Buddhist. Palappa is a Buddhist Bhairava rite to have sexual intercourse with a yogini. Gajah Mada pledged that he will abstain from this rite until Nusantara was conquered.

Thus, started the conquest of the Majapahit empire led by the Queen Tribhuwana with the help of Gajah Mada and her cousin Adityawarman. Gajah Mada conquered the entire island of Bali including the Kingdom of Pejeng and the island of Lombok. Adityawarman was sent to Sumatra to conquer the remnants of what was the left of the once glorious Sri Vijaya Kingdom and Malayu Kingdom with its capital, Jambi. He became the king of Minangkabau ruling as a vassal to the Majapahit empire. Gajah Mada also conquered the region corresponding to modern day Kalimantan. Additionally, Temasek (modern day Singapore), region around Kedah in Malay peninsula was conquered. Together Queen Tribhuwana and Gajah Mada will go on to build the Majapahit empire whose stretch of the territories equalled the distance from London to Jerusalem.

During the Gitarja’s reign, Ramayana and Mahabharata became part of the Javanese culture and are enacted since then through the Wayang Puppet shows. The Queen promoted Shaivism, Vaishnavism and Buddhism as the religions of the empire. The region went through Sanskritization or what was called Javanization in the regions under the Majapahit influence. This is the reason many people in Java retain Sanskrit names such as SriVidhya or Sundariputri though they practice Islam today.  The legacy of the architectural style of the Majapahit empire – including the split gates called Candi Bentar and the Pelinggih (the tower representing Mount Meru) could be seen today in the Balinese temples. Also Paduraksha style gateways are typical architecture of Majapahit empire. Paduraksha is similar to Candi Bentar but the top is covered with a tower.

Just like the Cholas of a different era, Majapahit empire developed a naval fleet which helped in dominating the seas of the South East Asia. The Javanese learnt of the gunpowder technology from the Yuan forces of Kublai Khan. Before the Mongol invasion, the weapons used were mostly bows and arrows, spears and short blades.  The Queen’s forces under Gajah Mada ushered in the new era in weaponry. They developed a breech-loading canon called Cetbang. These Cetbangs were mounted on small vessels and used in naval combat. These cetbangs were more of anti-personnel weapon.  As mentioned above, the elite forces of Majapahit protecting the Queen and other royals was called Bhayangkara. They used arquebuses (early guns) as one of the weapons. For comparison, canons were used predominantly in a warfare in India in 1526 by Babar in the First Battle of Panipat, some 200 years after the Queen’s forces used it.

In 1350, the queen mother who had become a Bhikkuni, Rajapathni Gayathri died. As the queen Tribhuwana was ruling under the auspices of the Rajapathni, she relinquished the throne to her son, Rajasanagara and retired.  She had married a noble called Chakradara when she became the Queen ahd had a son Hayam Wuruk. When she retired, the Majapahit empire’s territories almost matched the entire Indonesia of today. If one takes into consideration, the Malay and Singapore regions of today, it would far exceed the territories of today’s Indonesia. Hayam Wuruk assumed the name Rajasanagara when he ascended the throne. The reign of Rajasanagara ushered in another glorious period and further expanded the empire. Later the retired Queen was appointed the ruler of Kediri in Central Java by her son and was part of Bhattara Saptaprabhu, the council of royal elders advising the king.

After her death, she was deified aptly as the Hindu Goddess Parvati. It is a norm to deify the royals as the Hindu gods/goddesses. Her statue, which was located in Candi Rimbi temple in Trowulan was moved to the National Museum of Indonesia in Jakarta.

To draw a parallel, Tribhuwana and her son, Rajasanagara was the equivalent of father and son greats, Raja Raja Chola and Rajendra Chola. The queen’s legacy was such that today video games like Civilization VI depict her as the protagonist leading the Indonesian civilization. Today, the Flag of Indonesia retain the colors of the Flag of the Majapahit empire. More than 90% of the people in Bali practice Hinduism – courtesy Queen Tribhuwana whose conquest spread the current form of Hinduism. There are 300,000 Tenggerese ethnic people who practice Hinduism around Mount Bromo near Surabaya. They are descendants of the subjects of the Majapahit empire.  Likewise, the legacy of Gajah Mada, another hero in this glorious chapter, who reminds me of the brave General Paranjothi of the Pallavas serving the Pallavas (who became a Shivaite Nayanars later) warrants a separate topic.