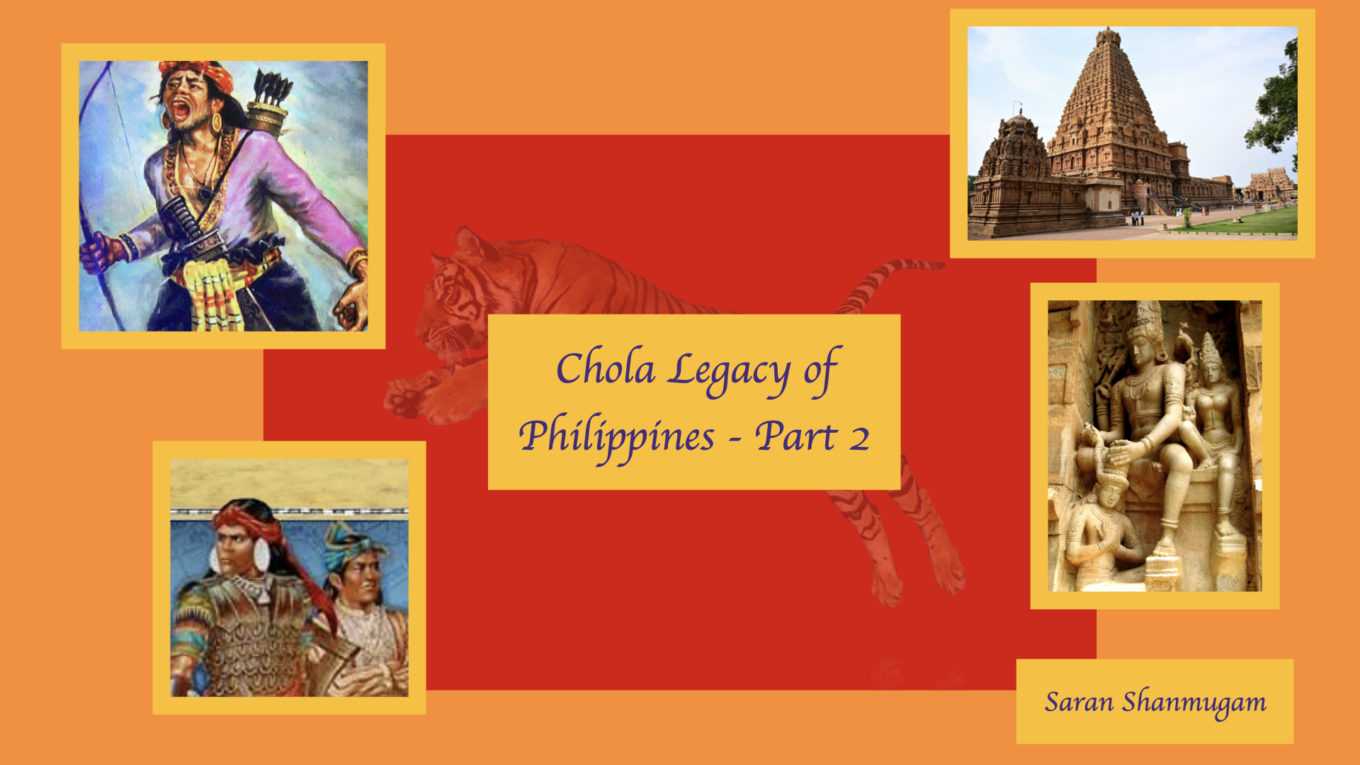 As I researched into their legacy, different versions of the Chola history emerged but the primary source of my article is the Aginid: Bayok sa Atong Tawarik, dance-epic, written in 1952 by Jovito S. Abellana. I have used sources such as Antonio Pigafetta, a traveler and a scholar who accompanied Ferdinand Magellan to the island of Cebu. Another source was Fr. Juan Medina (History of the Augustinian Order in the Filipinas Island, 1893 [but written in 1630]. This source does not have a favorable view of the Cebuano and was the primary reason to use it especially when this source talks about the bravery of the locals. Aginid was written by Abellana based on the folklore passed on through generations by his ancestors. Similar analogy would be folklore of the Rajah Desingu (Tej Singh) of Gingee in parts of Tamilnadu. I have strived to avoid the embellishments which might have happened when the folklore was passed on from generation to generation.

Going back to the history, Sri Lumay had 4 sons while the Rajahnate of Cebu traces the lineage to 2 of his sons, Sri Bantung and Sri Parang.

Rajahnate of Cebu did not occupy the entire Cebu island. The territories included primarily the region around Singhapala (refer to the map below). Sri Alho, another son of Sri Lumay, ruled parts of Southern Cebu. Sri Ukob ruled Northern Cebu. Effectively the Cebu island was divided among the 3 sons with territories corresponding to the North, Central and South Cebu. The 4th son, Sr Parang, had infirmity and was not given a region to rule but his son, Rajah Tupas was the last king of the Rajahnate of Cebu. Do note that I have used Sugbu and Cebu interchangeably. They mean the same island.

Another line of the descendants of Sri Bantung whose lineage was the Rajahnate of Cebu went on to become the chieftains of Bohol, an island nearby to Cebu. Bohol island has an interesting landscape with chocolate hills and beautiful rivers such as Loboc today. In 1621, the descendent of Sri Bantung, Tamblot who some associate him to be a Babaylon or a spiritual leader led the riots. The people of this region practice a mix of animist and Hindu religions. Their gods were called Diwathas – the word being a derivative from the Sanskrit word of Devata.

The Spanish source, Historia, written by Medina states that the Tamblot won a spiritual duel with a Spanish catholic priest and attributes it to the work of demons.  But the point to note here is that the incident where Tamblot won the spiritual duel against a catholic priest was quoted by another catholic priest, Medina in his letter. The revolt began on the day when the Jesuits were in Cebu, celebrating the feast day of St. Francis Xavier. Consequently, the regional magistrate of Sugbu, Don Juan de Alcarazo, landed with about 100+ Spanish soldiers and about 1000+ Sugbu native soldiers on the New year day of 1622. After 6 days of hiking the mountains, the Spanish force encountered Tamblot and his rebels who fought valiantly. The arquebuses of the Spaniards played havoc against Tamblot’s soldiers but the rebels held on until most fell.

The English translation of a snippet of Medina’s letters, quotes that the warriors of Tamblot fought bravely doing justice to the legacy of the Cholas – “Consequently, they became like mad dogs; and they preferred death to enduring the conditions of the conqueror. But so many fell that death had to fulfil its duty, namely, to inspire them with fear”.

Tamblot himself might have fallen in the final stages of the uprising. Though other sources attribute that he was assassinated by the catholic priests who sneaked into his camp, which made it easier for the Spaniards to crush the uprising.

To quote the Provincial government of Bohol site –

“The official flag of Bohol was approved per Provincial Board Resolution NO. 238 on 28 October 1969 and Resolution No. 121, series of 1971. Main Colors: Blue, white and red for nobility, purity and courage—seeksto perpetuate Bohol’s most illustrious local heroes namely, Sikatuna, Tamblot, Dagohoy and Pres. Carlos P. Garcia. Blood Compact: Re-enacts the blood compact between Sikatuna and Legazpi, on a background of green(The green signifying our fields) considered as our country’s first international peace treaty. Sword/”barong”: represents the Boholanos quest for independence as exemplified by the Tamblot Revolt (1621-1711) and the Dagohoy Rebellion (1744-1829). Star: At the top mid-section of the flag, on a background of white represents Bohol’s greatest son, Carlos P. Garcia, President of the republic of the Philippines from March 18, 1956. Dec. 30, 1961. The yellow star is superimposed with a blue star that symbolizes Pres. Garcia’a most important event in his life prior to his death—that of being the President of the 1971 Constitutional Convention.”

Inspired by his clan member, Tamblot, another chieftain, Bankaw, a descendent of Sri Ukob, son of Sri Lumay (refer to the chart above) started the uprising at an age of 75 along with his sons. The chieftain, Bankaw was ruling the island of Limasawa and few other regions in South Leyte (refer to the map). He was converted to Christianity in 1565 by Miguel López de Legazpi. Encouraged by the babaylon or spiritual advisor, Pagali, he returned to his original faith and built a temple for Diwathas. He was joined in the rebellion by his 2 sons and a daughter.

Alarmed at this “apostasy”, the parish priest, Melchor De Vera, traveled to Sugbu (Cebu) and informed the regional magistrate, Don Juan de Alcarazo about the uprising. Alcarazo with Spanish and Sugbu soldiers in 40 vessels invaded the region. In the ensuing battle, Bankaw and one of his sons were killed. They were beheaded and their heads displayed in the pikes as a warning to the rest of the population. Another son and the daughter were sent into slavery along with the rest of the rebels.

Abellana has claimed in Aginid that Juan Matandiyong is a descendent of Rajah Humabon, the Rajah of Cebu. In 1815, there was another Cebu uprising led by an enigmatic figure called Juan Diyong who is some say is none but Juan Matandiyong. Today the Provincial Flag of Bohol proudly keeps the legacy of Cholas alive, a fit tribute to the glorious dynasty from South India.