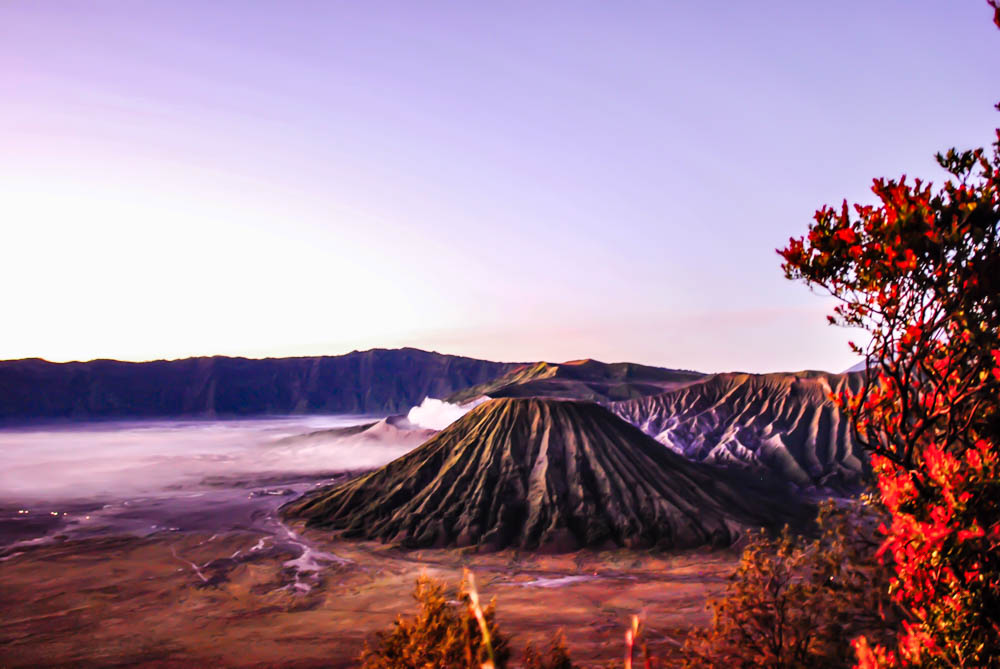 Mount Bromo, one of the many volcanoes located in Eastern Java, Indonesia  is an active volcano , along with the vast plain of black soil called Sea of the Sands (Javanese call it as Segara Wedi or  Lautan Pasir in Indonesian Bahasa), which is part of Bromo Tengger Semeru national park,  provides one with a spectacular view matched by only a few natural spectacles around the world. Combined with the Tenggerese culture, this marvel of the nature provides one with a truly once in a lifetime experience.

One need to go through the stirring experience starting early in the morning watching the sunrise from Mount Penanjagan nearby and hike to the Mount Bromo crater around mid-morning after the early morning sunrise.

Mount Bromo along with the Sea of the Sands is a designated national park, Bromo Tengger Semeru National Park, since 1919. So one would have to pay the entrance fees to the park(roughly 350000 rupiah). The access to the volcano is through the village of Cemoro Lawang. You need to trek 5 miles through the sea of the sands (Javanese call it as Segara Wedi or  Lautan Pasir in Indonesian Bahasa). The Sea of the Sands itself will present one with the experience of walking on the surface of the moon due to blackish volcanic soil. And finally hike about 150 meters to the top of the crater of the Mount Bromo. Alternatively, as majority do, take a jeep tour which includes the visit to the Mount Penanjagan for a sunrise view of Mount Bromo and followed by a trip to the foot of Mount Bromo. A few rent motorcycles with drivers. Do take a winter jacket as the temperatures will fall to 0 degrees C early morning.

The cultural association of Mount Bromo starts in the sea of the sands, where one will come across a temple called Pura Luhur Poten, a temple meant for Brahma, one of the Trimurthys of the Hindu religion. The ethnic people living around Mount Bromo in the 30 villages and around Probolinggo are called Tenggerese and practice Hinduism in the otherwise Muslim dominated island of Java. There are about 300,000 of them today. Though the temple is meant for Brahma, they pray to the supreme god of Hinduism in these parts of the world called Ida Sung Hyang Widi Wasa. All the other gods including the Trimurthys, Siva,Vishnu and Brahma are all believed to be manifestations of the God, Widi Wasa as per the belief of Indonesian Hindus. The emphasis in the supreme god happened in the 1950s due to the Indonesia’s religious policies which recognizes only monotheism but wanted people to identify themselves to one of the 6 recognized religions. Widi Wasa is none but the Brahman, the core belief of the hindu religion.

The temple itself is tied to the folklore of Roro Anteng and Joko Seger. The last king of Hindu Majapahit kingdom, Brawijaya had a daughter, Roro Anteng who was married to a Brahmin, Joko Seger. After the defeat of the king at the hands of the Islamic forces, the hindus along with Roro Anteng and Joko Seger, retreated to the eastern Java and settled around Mount Bromo. Joko Seger became the king of the Tenggerese, the hindus who came along with the prince and the princess. The kingdom became prosperous under his rule but the King and the Queen did not have the children. The King and the Queen climbed up to the crater and prayed to the universal God, Widi Wasa, who through  the echo in the sky promised them children and asked them to sacrifice the 25th child born to them. The Queen had 25 children as per the blessings of Widi Wasa and the 25th child, Kesuma, was thrown into the crater as a sacrifice to the god. Since then it has been the practice of the Tenggerese to pray to Widi Wasa in the temple, Luhur Poten, on the 14th day of the Kesada(the 12th month of the Tenggerese calendar) and climb up the Mount Bromo and throw the sacrificial materials which includes fruits and animals such as goats into the crater.

How to get there?

If one is flying, they need to fly to Surabaya International airport or Malang airport. I preferred Surabaya as the price was cheaper flying out of Yogyakarta costing me around $35 one way. At Surabaya airport, take Damri bus outside of the airport terminal and go to Purabaya bus terminal which is a 20 min ride. At Purabaya bus terminal take the bus going to Banyuwangi. It costs around 30000 rupiah per person from Purabaya bus terminal to Probolinggo and take about 2 hours 30 mins to reach there. Warning: ask the bus conductor to drop you at the Probolinggo bus terminal.If only the tourists are being asked to get down at Probolinggo and the locals are not getting down, then that is not the terminal but a location of a private tour operator who is in cahoots with the bus operators to fool you into an expensive tour package of Mount Bromo and Ijen volcano. Even if you made the mistake of getting down at the tour operator’s place, do not worry, you can get a minivan paying 2000 rupiah to the bus terminal. Outside the bus terminal, there are minivans going to Cemoro Lawang, the village at the entrance of the Mount Bromo. It is on a share basis accommodating 10 people and will charge about 25000 rupiah per person. Do note that they will wait even for an hour or more for the entire van to fill up. I paid for 5 additional passengers’ fare as I lost patience waiting.

How to get out?

There are mini vans which waits for the passengers in the main street of Cemoro Lawang village taking one back to Probolinggo bus terminal in a 45 min journey and will cost you 25000 rupiah per person. Once at the Probolinggo bus terminal, one will get the bus back to Purabaya bus terminal(in Surabaya) or Malang. In the terminal, you will get the Damri bus back to the Surabaya airport(you can ask anyone and they will guide you to the location of the Damri buses)

The best option and inexpensive one is look for homestays at Cemoro Lawang and do not go by what the touts in Probolinggo say(incuding the van operators) about the limited accommodations. You can get one once you reach the village. It would cost you about $15 USD roughly per room. And the people in the village are caring. So you would not have issues finding a room.

One thought on “Mount Bromo,Java”