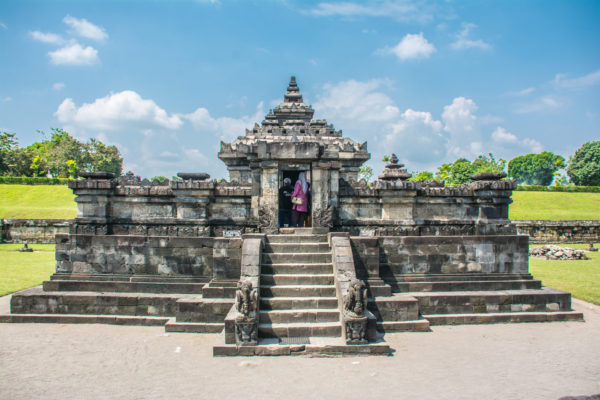 After my transfixion with Prambanan and Borobudur the previous few days, I had 2 more days in my hand and I thought I will put them to better use to explore other temples and structures in the region though my body was crying for a rest with my travel from US and 3 days of being in the hot sun. Finally, my spirits won and I planned to explore other temples and structures in the region. As the hotel offered scooters for rent, I rented one of these and ventured out with Hema (hotel details below). Do understand that this region of Central Java is very safe and these people are one of the friendliest people I have come across. Hema and I had a first hand experience of public adoration. Different groups of people, who had come to see Candi Sambisari, wanted us to take pictures with them for being Indian Hindus.

Sambisari is a Shivaite temple complex, which is situated about 4 kms from Prambanan and about 8 kms from Yogyakarta. This temple was constructed around 9th century. Though there is a dispute about who built it (many claim it might be built by one of the local Noblemen), it was constructed during King Rakai Garung period of the Mataram Kingdom.

It is believed to have got buried under the lava due to the Mount Merapi eruption in 1006 AD. It was discovered by a farmer of Sambisari in 1966 and the temple was given the name of the village itself.

The main temple contains a Linga-Yoni structure. The Yoni has a water sprout on the northern side supported underneath by Naga.  There are 3 Perwara temples (“waiting women temples”) in front of it. The entrance of the main temple is in the west and has about 10 steps. At the entrance on both sides are Shiva-Ganas holding Makara and protecting the temple. The eastern side has Ganesha statue framed by Batara Kala (similar to bas reliefs in Borobudur). The northern side has Durga Mahisasura Mardini again framed by Batara Kala. And Saint Agastya is on the southern side also framed by Batara Kala. Batara Kala is the God of destruction in Javanese mythology but would indicate Kalam (time in Tamil) or Kala (time in Sanskrit). The 3 Perwara temples are without a roof. There are 8 small lingas placed in 4 cardinal points and 4 corners.

Hema and I took our own time exploring the temple and sat in the coffee shop drinking coffee and whipping up conversations with the locals to dig more information about the temple though the language barrier was too much to overcome to our amusement. We headed out to Ratu Boko exploring the country side on our way, which was in itself a pleasant experience.

Standing regally on a plateau overlooking Prambanan temples with Mount Merapi providing the background is Ratu Boko. Ratu Boko was a palace complex of the ancient Mataram Kingdom. The kings of this Kingdom built on the temples including Prambanan and Borobudur. The palace complex is situated 3 km from Prambanan temple compounds and is spread on a 16-hectare land. The palace is located at a height of 196 meters above sea level.

Vishnu on the top of a small hill

Ratu Boko is named after King Ratu Boko of the Loro Jonggrang folklore (covered in the Part 1 of this series). Originally it was named as Abhaya Vihara, meaning a place of stay for Buddhist monks on a hill. It is believed that Ratu Boko was built by Rakai Panangkaran of Sailendra Dynasty between 750 AD and 780 AD as per the inscriptions of 792 AD. It is believed, he built it after he relinquished his throne and became a monk. Somewhere down the line, it was converted into a palace with fortifications and women’s quarters and bathing pools.

The structural remains of Ratu Boko are split into 4 parts, center, west, east and southeast.

The central part consists of main gates built in a Paduraksha form with roofed gates, typical of Javanese and Balinese architecture. The gates are at 2 different levels. It also has crematorium temple called Candi Pembakaran. A climb up the hill will take one to a small shrine like structure with Vishnu statue in it from where Prambanan and Mount Merapi is visible. Next to Candi Pembakaran is a pool, stone pedestal and an audience hall (called Paseban).

The southeastern part consists of Pendopo (open veranda) and a public hall and 3 miniature temples for either Buddhist or Hindus.

The eastern side has a bathing pool and women’s quarters. This part also has Amerta Mantana (well with holy water). The water is used by Hindus for Tawur Agung ceremony celebrated by Hindus here one day before Nyepi (celebrated by Balinese Hindus as well. After all Balinese Hinduism was influenced by Hinduism of Majapahit Kingdom, which later ruled this region)

The Northern part has 2 caves and a pool. The caves were probably used as a place for Buddhist monks’ meditation.

The temple belongs to the Vihara type, meaning it was a place for monks to stay and pray.

Candi Lor has two main temples. Both are identical but the North main temple has female figures on bas reliefs while the South main temple has male figures. The temples themselves has 3 levels, a square podium with a cubic middle layer and a 3 step pyramidal roof. The closest resemblance to this architecture are the Arjuna Ratha and Dharma Ratha in Mahabalipuram, India, constructed by the Pallava Dynasty. The 3 levels reflect the Buddhist cosmology similar to Hindu Mandala concept. The bottom layer or the foot represent the world of desires (Kamadathu), the body or the middle layer represent the world of forms (Rupadathu) and the top layer or the head represent the world of formlessness (Arpadathu). Each temple inside has 2 levels and each level has 3 rooms each. In the two side rooms in the lower level, there are 2 Bodhisattva statues though it was believed that there were 3 Bodhisattva statues on each side rooms while the middle room had 3 bronze Buddha statues for a total of 9 statues in each temple. The upper level was made up of wooden structure accessible through wooden stairs but today the wooden structure and the stairs does not exist. The bas reliefs consist of various demigod figures such as Bodhisattva Avalokiteswara statues.

There are a total of 174 smaller structures with 116 shrines and 58 stupas in the Candi Lor complex. Both these temples have 2 large statues of Dwara balas.

Candi Kidul on the other side of the road has similar smaller structures but no main temples. Only few of them have been restored.

Note: Walk around the rice fields to experience the Javanese country side.

Candi Kalasan is a Buddhist temple situated about 5 Km from Prambanan on the way to Yogyakarta. The temple was built in the 8th century as per the Sanskrit inscription in Nagari script found in the temple. For the records, Kalasan is the oldest temple in the Prambanan plains. Kalasan is dedicated to Goddess Tara or Bodhisattva Devi. There is a Vihara nearby for monks to stay which is Candi Sari covered below. At the time of my visiting, the temple was undergoing renovations.

The temple’s body is a 12 cornered polygon with the stepped entrances framed by Kala-Makara on 4 cardinal points. Apart from that, there are niches containing Bodhisattvas seated on Lotus pedestals again framed by Kala-Makara. Also there are divine characters like Ghandarvas and Apsaras, which adorn the walls. The roof has 3 sections. The lower section again is a 12 cornered polygon reflecting the body and contains niches and stupas. The niches contain Bodhisattvas seated on Lotus. The middle layer is an 8 shaped Polygon with niches containing Buddha with Bodhisattvas on the flanks. The top layer is circular in shape with a large stupa on top.

Inside the temple is the missing bronze statue of Goddess Tara.

Candi Sari is few hundred meters from Candi Kalasan. Sari is the Vihara or monastery for the Buddhist monks praying in Candi Kalasan. This temple was built in the same period as Kalasan as per the Sanskrit inscriptions.

The architecture is similar to the Candi Plaosan Lor temple, a structure with 2 storeys and the outer structure is a 3 level structure with base, body and roof reflecting Buddhist cosmology (see above under Candi Plaosan).  The upper storey, with 3 rooms, was made of wooden structure with wooden stairs extending from lower storey to upper storey. The lower storey had statues for the monks to pray.  Today there are no statues but the frames of Batara Kala indicate the presence of statues once upon a time. The outer wall is covered with niches, bas reliefs of Bodhisattvas, mythical benevolent creatures of Kinnaras/Kinnaris for a total of 36 statues. The statues are in an elegant dance form.

There are interesting places like Ijo Hindu temple and Dieng Plateau with Pandava temples, which I did not have time to visit. But similar to the Angkor, this region is full of Dharmic structures. It is only fair to say that Hinduism survived because of the influence of this region and the Hindu Majapahit Kingdom, which ruled this place before being defeated by Islamic forces in the 16th century. Some of the defeated inhabitants of the Majapahit Kingdom moved to Eastern Java and settled there. Today they form the ethnic group of 300,000 Tenggerese who practice Hinduism and pray at Mount Bromo (which I was fortunate to visit as part of this trip). And more importantly, one of the priests of the Kingdom, Dang Hyang Nirartha, moved to Bali and established the Shivaite Hinduism practiced in that island today.

How did I get there?

I flew into Yogyakarta international airport as it is better connected domestically and internationally. Do note that the local airlines do not take foreign credit cards. So you can’t book tickets online. Just go to their local office to book the local flights. The price from what I noticed remains the same whether you book 2 months in advance or 1 day in advance. It is around $35-$40 one way to different destinations. I went to Denpasar office in Bali – all the local airlines’ desks are in the airport and seated next to each other.  Also note that they accept only Indonesian Rupiah and not USD or other foreign currencies.

Prambanan is situated 20 minutes from the Jogjakarta or Yogyakarta international airport. It costs around 70000 Indonesian Rupiah (conversion rate is roughly 13000 Rupiah to 1 USD at the time of writing this article) in taxi from the airport to Prambanan.

Where did I stay?

I stayed at Poeri Devata resort, which I happened to book for roughly $38 per night. I had a pleasant experience due to the friendly staffs. The hotel is situated on the backside of the Prambanan complex and provides a view of Prambanan temples. The hotel provides free ride to the Prambanan temple compound entrance. The other option is to stay in Yogyakarta but I recommend staying in Prambanan as there is easy access to other archaeological complexes like Ratu Boko palace, Candi Sambisari, Candi Plaosan, Candi Kalasan, Candi Sari and one can visit these sites with the motorcycle, which you can rent from the hotel at 10000 rupiahs per hour (roughly $1 USD). Do note you will need International riding permit.