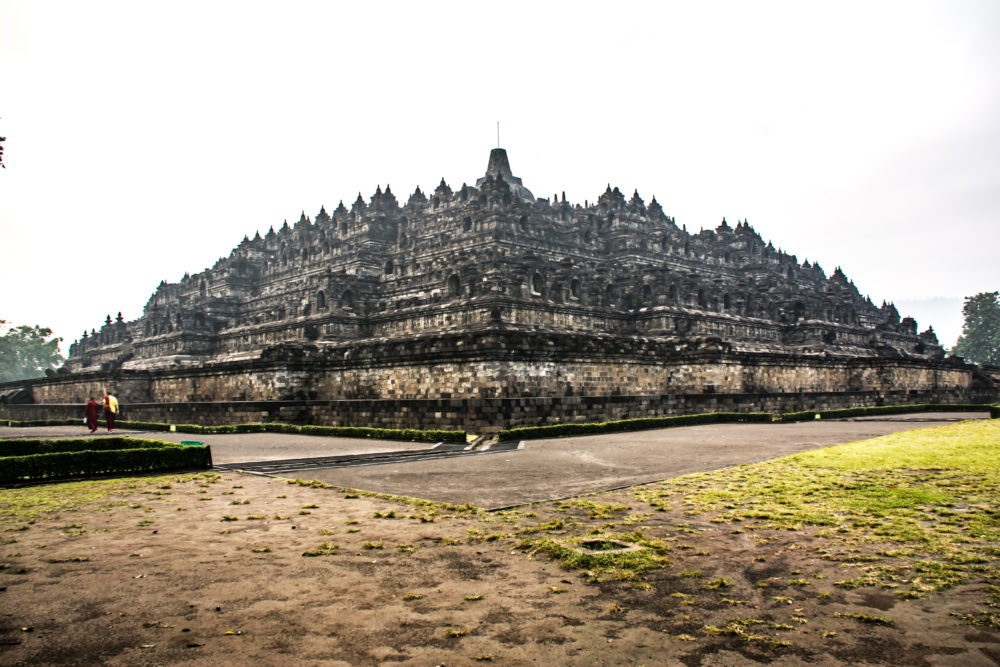 Borobudur – the architectural splendor with a splash of Indian culture and religion. This is a Buddhist place of religious worship constructed in the 8th century by the Sailendra dynasty of the Mataram Kingdom and is located in Magelang province, Central Java, Indonesia. It is about 1 – 1 1/2 hours away from Prambanan. There are few places, including the much overhyped 7 Wonders of the world, which makes one feel exhilarated like Borobudur.

After my surreal experience at Prambanan temple compounds as part of the Central Java sojourn, I was looking forward to visit this tranquil beauty, though I was exhausted from all the walking I had done the previous day at the Prambanan temple compounds. I decided against riding the rental scooter, as Borobudur is 1 ½ hours from the hotel at Prambanan (details about the hotel below). I booked a taxi, helped by the Assistant Manager of the Hotel, Widiya (meaning Vidhya or complete knowledge or Goddess Durga).  To give you the context about the name, people in this region have made a clear distinction between the religion and the culture. The majority religion is Islam while Sanskritized names and the epic, Ramayana are part of their culture.  Even their language, Bahasa Indonesia has lots of Sanskrit words.  The restaurant staff at the hotel was kind enough to pack my breakfast and also prepare a pot of coffee before I started my trip to Borobudur. After an eventless ride starting at 3 am, I reached Hotel Manohara along with Hema.

The entrance to the Borobudur sunrise is through Hotel Manohara, a private entrance (details given below). I started the visit early in the morning at 4:30 am with a small torchlight in my hand, climbing the stairs of Borobudur in the dark. Sweating profusely, I attached my exertion to the unhealthy state of my physique and the tropical weather. Lo and behold, the marvel unfolded slowly as the early morning sun rose up and started to spread its radiance all around the massive structure. Still the colossal elegance did not dawn upon me when I was standing on the top of the structure unable to visualize the glory.

After I was done photographing the light opera with the sunlight reflecting upon the 72 perforated stupas on the top, providing a kaleidoscopic effect, I started the walk down and that is when the sophistication and massiveness of the structure with different levels and artfully created bas reliefs sunk upon me. For the record, Borobudur is the largest Buddhist structure in the world and is a UNESCO site.

Not that the structure is without blemishes. The agents of Denudation, along with Mount Merapi and neglect, caused Borobudur to be completely forgotten a few years after its construction (probably abandoned due to Mount Merapi eruption) until it was rediscovered again in the 19th century by Sir Thomas Raffles, British Governor of this region (he is also the founder of Singapore). Full-fledged restoration was completed in 1981 but was damaged again by the eruption from Mount Merapi in 2010. Indonesian Government and UNESCO started the restorations and completed the cleanup of the acidic ashes from Mount Merapi in 6 months.

The architecture is a blend of Indian Gupta and the indigenous Javanese architecture. The structure is square in shape with 118 meters (354 feet roughly) on the 4 sides and is a stepped pyramid with 9 layers. The bottom 6 are square shaped and the upper 3 layers are in circular shapes. In the top are 72 perforated stupas with Buddha statue in each of the stupas and is arranged in concentric circles at the top 3 levels. The 9 layers are arranged as per the Buddhist cosmology similar to the Mandala concept in Hinduism – bottom layers or the foot represent the world of desires (Kamadathu), the body or the middle layers represent the world of forms (Rupadathu) and the top layers or the head represent the world of formlessness (Arpadathu). The Buddhist cosmology based structure was borrowed from Indian Gupta architecture based on Mount Meru, the sacred mountain for the Hindus.  Each of the 9 layers contain bas reliefs on the panels and the balustrades depicting various Buddhist/Hindu mythological figures – Bodhisattvas, Apsaras, Kinnaras. Do note the circular 3 layers on top do not have any bas reliefs. The 9 layers together provide 1460 scenes of bas reliefs. The structure itself is made of volcanic stones found nearby.

After I took the landscape picture of the entire structure from a distance, I started walking back to the entrance as the sun started heating the air. Also crowds consisting of students and local tourists started arriving in droves. I walked out along with Hema tired but mentally refreshed with my spirit humbler than ever overwhelmed by the experience.

Note: The sunrise tour is through the Manohara hotel entrance and would cost 380000 rupiahs for Non-Indonesians (roughly 30 USD) and 250000 (roughly 19 USD) rupiah for the Indonesians and includes refreshments on returning back. The tour starts around 4:30 am from the hotel lobby.

Also note on returning back, state you are part of the sunrise tour and they will guide to the Manohara hotel exit instead of the general exit.

I strongly recommend the early morning sunrise tour as the sunrise view itself is beautiful and one can avoid the hot/humid weather. But the main reason would be to beat the crowd which surges in during daytime as this is the most visited place in Indonesia. But on the flipside, the pictures may not turn out great due to the foggy conditions which are prevalent early in the morning.

Borobudur was initiated probably as a Hindu Shiva temple and 2 lower terraces were built when the Sailendra dynasty shifted its allegiance to Buddhism. And so the project to built the biggest Stupa in the world started.

How did I get there?

I took a taxi booked by the hotel folks from Prambanan, a 1 hour ride early in the morning but which took 1 1/2 hours in the late morning due to traffic and set me back by 700000 rupiahs (or roughly 60 USD) but well worth it. If you are flying in, I would suggest flying into Yogyakarta international airport as it is better connected domestically and internationally. Do note that the local airlines do not take foreign credit cards. So you can’t book tickets online. Just go to their local office to book the local flights. The price from what I noticed remains the same whether you book 2 months in advance or 1 day in advance. It is around $35-$40 one way to different destinations. I went to Denpasar office in Bali – all the local airlines’ desks are in the airport and seated next to each other.  Also note that they accept only Indonesian Rupiah and not USD or other foreign currencies.

Prambanan is situated 20 minutes from the Jogjakarta or Yogyakarta international airport. It costs around 70000 Indonesian Rupiah (conversion rate is roughly 13000 Rupiah to 1 USD at the time of writing this article) in taxi from the airport to Prambanan.

Where did I stay?

I stayed at Poeri Devata resort, which I happened to book for roughly $38 per night. I had a pleasant experience due to the friendly staffs. The hotel is situated on the backside of the Prambanan complex and provides a view of Prambanan temples. The hotel provides free ride to the Prambanan temple compound entrance. The other option is to stay in Yogyakarta but I recommend staying in Prambanan as there is easy access to other archaeological complexes like Ratu Boko palace, Candi Sambisari, Candi Plaosan, Candi Kalasan, Candi Sari and one can visit these sites with the motorcycle, which you can rent from the hotel at 10000 rupiahs per hour (roughly $1 USD). Do note you will need International riding permit.