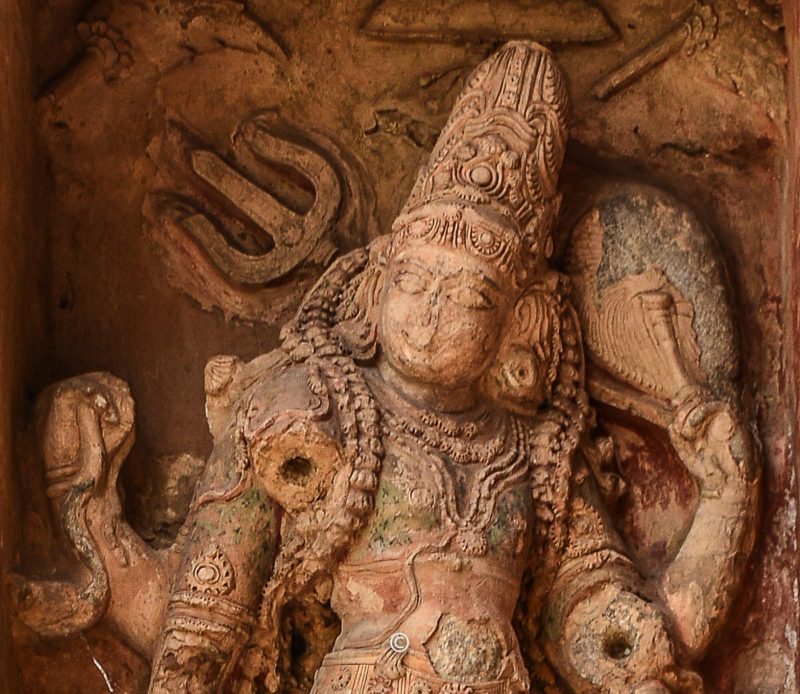 As the naked mendicant wanders all over the world with the Kapalam (skull) begging bowl in his left hand, atoning for his sin of slaying the 5th head of Lord Brahma, the gentle Bhikshatana Murthy reaches the abode of Lord Vishnu. As he tries to enter the abode of Vishnu, Vishwaksena (Senai Mudhalvar), gatekeeper of Vishnu’s abode and the commander-in-chief of Vishnu’s army tries to stop him. In rage, Bhikshatana Murthy slays him and impales him in his Trisulam, which adds to the sins of the naked beggar. Now with the added sin, the Murthy takes the form of Kankala-Murthy, one with the skeleton, lesser known form of Bhairavar depicted in many of the Shiva temples in South India.

Kankala-Murthy is often depicted with Jadhamudhi. In this sculpture from Gangai Konda Cholapuram, built by the great Emperor, Rajendra Chola I, he is depicted with a crown with the hair flowing from the side. He bears a happy expression as beautifully depicted in this picture. Normally he has 4 hands but the statue here has 6 hands, 2 of them broken. While the 2 hands are still a mystery for me, the 4 hands which are normally represented are still available here. The front left hand holds the Kapalam (skull) bowl. The back left hand holds the Kankala Thandam (staff) , resting on his left shoulder. The Thandam holds the bones of the Vishwaksena, while peacock feathers and a bell adorn the Thandam. The front right hand (middle right hand if the front right hand was not broken) with a Kataka Mudram, holds tender leaves and his pet deer playfully feeds on the tender leaves. The back right hand holds Devaki, the snake. The ornaments made of bones adorn like garlands. The Janeu or Poonool adorn his chest. Tiger Skin wraps around his waist. And he wears a Padukai. Padukai is a wooden footwear with a knob which is held by the big and second toes. Padukai is worn only by Yogis. The knob activates a pressure point in the leg which induces celibacy. On the right, he has a Boodha-Ganam holding a large bowl on his head to collect the food begged by Kankala-Murthy. He stands with his left leg straight and his right leg slightly bent forward showing that he is walking.

On the rightside and leftside, there is Chandran and Suriyan. Below them are the Boodha-Ganams. On the bottom are the wives of great sages, following Shiva, ready to serve him food. Some are love-stricken. One woman can be seen trying to hold on to the loin cloth due to lust. And some are topless. Just shows that the Cholas did not shy away from depicting erotic sculptures in temples showcasing the ancient India was an advanced society before invaders sent it into a shell (I have seen it in other Shiva temples as well – for example, Villupuram Shiva temple). Other Gods follow the Murthy as he wanders around – shown in the lower part of the panel.

This masterpiece just shows the expertise of Chola artisans. And one would only be awestruck to know that 1000s of such breathtaking pieces are available in different South Indian temples built by the Cholas.

2 thoughts on “Exquisite sculpture of Kankala-Murthy”