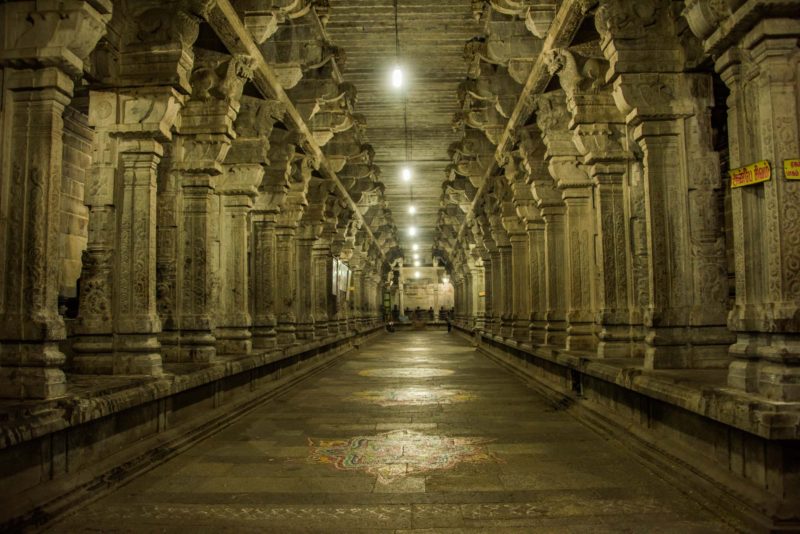 Kanchipuram or Kanchi in Tamilnadu, India – one of the major centers of education in ancient India and the capital city of Pallavas. Kanchipuram is equally important to both Saivaite and Vaishnavite Hindus. So the city’s religious presence can be divided into Siva Kanchi and Vishnu Kanchi. In ancient times, Buddhists and Jains were thriving in this city with their religious centers established.  The highlight of this city are the numerous temples built by Pallavas, Cholas and later additions by Vijayanagar kings,  showcasing their temple building skills. The combined architecture (along with other architectures followed by Hoysala, Chalukya etc) make up the Dravidian Architecture style of temple building followed even in SE Asia such as Angkor Wat of Cambodia and Prambanan in Indonesia.

Personally, I was always fascinated by Kanchi and its temples.  For example, Ekambareswarar temple is my favorite having grown up reading Sivagamiyin Sabatham, an epic novel written by Kalki about the Pallava dynasty and their rivalry with Pulakesi II of Chalukya dynasty. The novel ends with Sivagami, the protagonist dancing in the Ekambareswarar temple. Last year on my visit to India, I planned to visit the city but could not due to other commitments but this time my wish was fulfilled as I had a chance to explore this old city.

4 standout temples in Kanchi are being covered in this article though the list is slightly subjective.

There are numerous other temples in Kanchipuram which I have not covered here and which are equally as old as the temples above.  Kanchipuram houses 14 of the 108 Divya Desams for Vaishnavite Hindus.  Some of the other noteworthy temples are Trilokyanatha Temple for Jains and Vaikunda Perumal temple. No wonder, Kanchi is chosen as one of the heritage cities for preservation under National Heritage City Development and Augmentation Yojana scheme of Government of India. The list of all the temples can be seen here  in this Wikipedia article though I have not verified the accuracy of the article  – https://en.wikipedia.org/wiki/List_of_temples_in_Kanchipuram.

How to get to Kanchipuram?

Chennai is the nearest city to Kanchipuram, located about 75 Kms  and has international airport. Cabs are available from the airport to Kanchipuram for about $20-$30 roundtrip. Alternatively, there are metro trains which ply from Chennai beach station to Kanchipuram, which stop at Meenambakkam and Trisulam stations, which are located near Chennai airport. I took the metro train which took about 2 hours and cost me about 15 rupees (25 cents) for 2nd class fare and 160 rupees (2 1/2 USD roughly)  for first class fare each way.

How to get from one temple to other?

The best way to move from one temple to another is taking the autorickshaws or Tuk-Tuks. Talk to the local shopkeepers to get a feel for the rates for hiring these autorickshaws and they would suggest the rates. As per my experience, the autorickshaw drivers are reasonable with their demands.

One thought on “Kanchi – City of Temples”