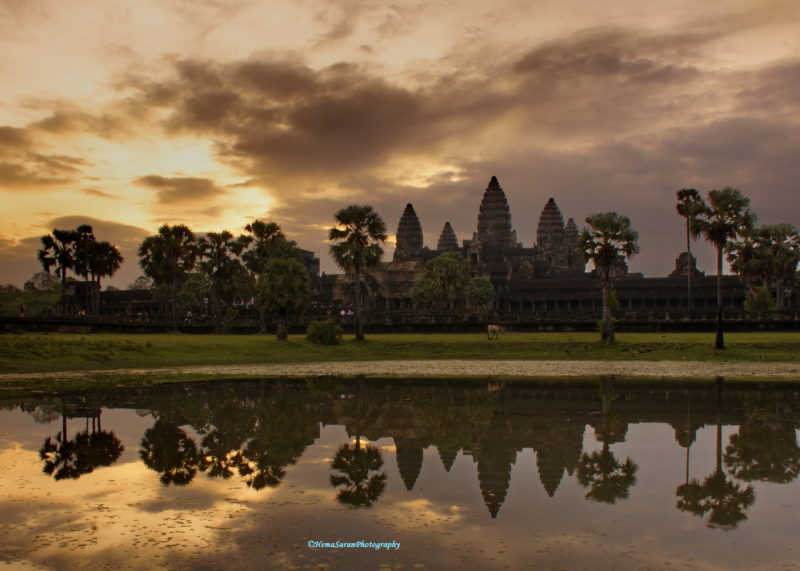 My trip to Brihadeeshwara temple or the Big temple at Tanjore in Tamilnadu, India made me wonder about Angkor Wat, the biggest Hindu temple to be ever built. The grandeur of Tanjore temple is such that one would want to go see the Angkor Wat, since both reflect similar architecture. This made me decide to go on a trip to Cambodia to visit and view the history and architecture of an erstwhile era gone by, an era of Hindu kings that ruled Angkor.

The magnificence of Angkor Wat cannot be described in mere words. It is an artist’s dreamland. A dreamland of masterly sculpted stonework. This fine sculpting on stone is feast for eyes that thankfully a camera can reproduce as a poor copy for the world to see and enjoy. My first sighting of this monument was at the break of dawn, under heavily clouded skies. Inspite of it being a non- starter sunrise, the first viewing held me spellbound. I was simply not ready for the visual poetry that assaulted my senses. People were oohing and aahing all around me. A familiar silence enveloped us as nature and a 1000 year old manmade marvel came together perfectly to create visual magic.

A little bit of background history on Angkor Wat before we delve further. Angkor Wat is a modern name given to this temple; no one knows what it was known as before it was named as Angkor. Angkor comes from the word “Nogor” which traces its roots to the Sanskrit word “Nagar” which means city, Wat means Temple in Khmer language. A simple translation Of Angkor Wat is City Temple.

Angkor Wat was built by Suryavarman II.  Suryavarman II came to power after killing his uncle Dharaindravaman I.  The work for building this architecture marvel began as soon as the King ascended the throne in 1113 CE. King Suryavarman II was an ardent devotee of Vishnu the protector. He decided to build the Angkor Wat temple and dedicate it to Lord Vishnu. Before Angkor Wat was built, the Baphoun Temple next door served as the state temple. The Angkor Wat is built in over 500 acres of land and faces the West. The West is associated with Lord Vishnu. Suryavarman ‘s dedication to Lord Vishnu was so great that he is also known as Paramavishnuloka (means Parama – Great, Vishnuloka – Vishnu’s abode/world) . There are five towers representing the five peaks of Mount Meru, the abode of Gods (a representation of mountains). The five towers are surrounded by a moat, which is a representation of the Oceans.  When one visits this temple, one has to climb several steep and narrow stairs to the central shrine, mimicking mountain climbing to reach the summit. Angkor Wat is built in a way that represents the world. The Central tower is 65 meters (213 Ft.) tall surrounded by four smaller towers. In the sanctuary of the central tower was where Lord Vishnu’s statue was placed, till it was removed and replaced by the current statue of Lord Buddha by Buddhists who lived in the temple complex. The temple was continuously built and decorated till the death of the king, Suryavarman II (37 years). The construction was stopped so abruptly that some of the bas-reliefs are left halfway done.

It is built in typical Khmer architecture, which borrows a lot of its style from early Dravidian architecture found in South India. It consists of stepped terrace pyramids, surrounded by concentric rectangular galleries. These rectangular galleries are beautifully decorated by sculptures and carvings (bas-reliefs). Angkor Wat is a three level pyramid, each enclosed by a gallery, surrounded by Gopuras. 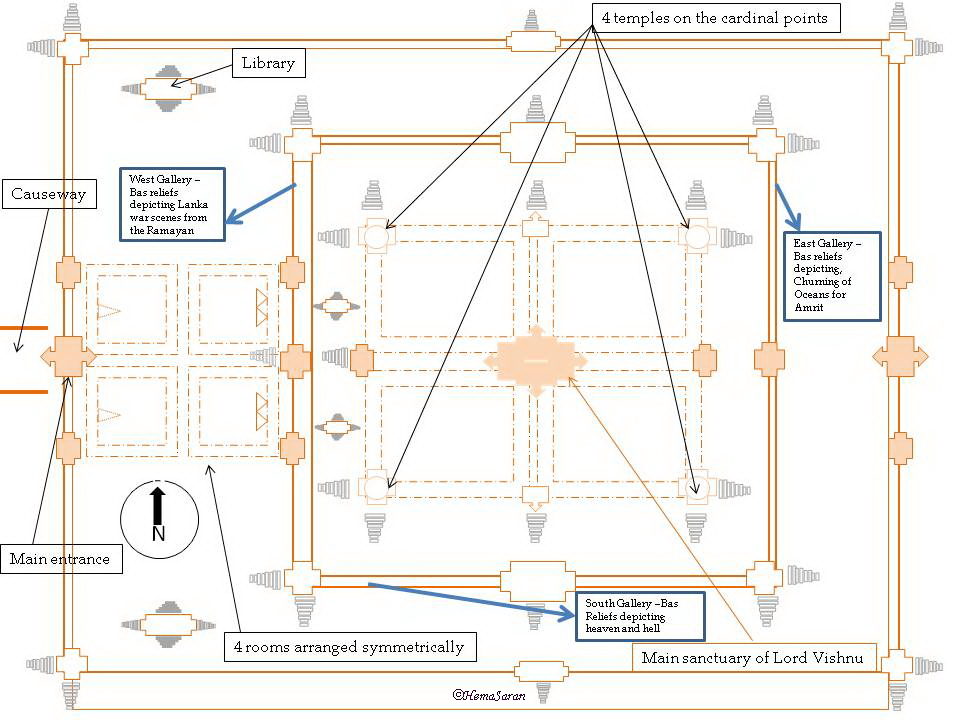 Enter the Angkor Wat through the west gate. Once you enter, you will walk across a long causeway about 200 meters wide connecting the entrance gate to the main entrance pavilion of the temple. The main entrance is 230 meters wide. The passageway could accommodate 3 elephants at a time for royal processions.  Once you enter another causeway connects one to main temple pavilion. There are two small libraries on both sides with four doorways (no one is aware of the function of these libraries). The two ponds on both sides reflect the beautiful temple like a mirror image, this was built later. The causeway has a low balustrade decorated with mythical Naga heads on both sides of the balustrade. Two statues of lions in a seated position greet us on either side at the end of the moat just before the entrance (these are the guardians of the temple).

The exterior wall of the temple is called the third enclosure and this will be first entrance.  This wall sits on a 3 meter high plinth. Enter the temple from the west gate and you will see that there are 4 rooms arranged in a perfect symmetry like a swastika the holiest symbol of Hindus and Buddhists alike. Each room has a gallery around and the floor is sunken in with a water body perhaps. The southern section of these 4 rooms is known as the gallery of a thousand Buddhas , as the Buddhist followers left a lot of Buddhas here. On the North and South side of the 4 rooms are two libraries. Exit out of the 4 rooms via East door. You will see the second enclosure which is about 5.8 meters high.   A narrow flight of stairs will take you up. There are two more libraries in the Northwest and Southeast section of the wall right next to the stairs that takes one to the second enclosure.  The inner wall of the second enclosure has 700 meters of continuous bas-reliefs carved into the walls. Many stories from the Ramayana, Mahabharata, Bhagvat Purana (the story of Nagas and Devas churning the ocean of milk for Amrit (The elixir of life) and many dancing Apsaras in various poses are etched on to the walls. These beautiful intricate carving directly onto the stone walls makes one appreciate the sculptor and creator of this fine art on walls even more , as many artisan must who must have sat hours chiseling away on a hot sunny days to create a cohesive narrative. Once you have walked through the gallery of Bas reliefs. Come out and walk around on the outer section of the Second enclosure. You will get to see the 5 towers touching the skies above. Continue to climb the steep flight of stairs that will take you to the inner enclosure or the first enclosure of the temple, where the sanctum sanctorum of Lord Vishnu was established by the King Suryavarman II.  The inner enclosure sits atop a two level pyramidal structure that is 11 meters tall. The upper courtyard has a continuous gallery that abound 4 symmetrical rooms just like the ones that we saw at the entrance with a sunken floor and a water body covering the courtyard. The five towers protrude out of the upper level of the courtyard 2 meters high, surrounded by Naga balustrades. The towers are placed in four cardinal corners with central one in the axis. The temples look like five lotus buds ready to unfurl.

The Central tower is placed on tiered base that rises 42 meters above the upper level.  There are passages that link to the central tower. The four towers are linked to the central tower via passages and stairs. A double row of pillars support a narrow covered gallery, with windows through which one can see the city of Angkor.  This gallery is a continuous one that links all the four towers. To get to the sanctuary of the Central tower, also known as Bakan, we can climb any of the three stairways on four sides going up to each entrance (twelve in all). As one climbs up these steep stairs it feels like one is ascending the stairway to heaven.

Four entrances facing the primal directions would have brought in plenty of light and air into the main sanctuary. The four entrances were boarded shut by filling it with sandstones by Buddhist monks. On this new sandstone wall a relief of standing Buddha has been sculpted.

Once you come down, you turn towards the south side to go and view the eight armed Vishnu the original deity to whom Angkor Wat was dedicated. The original was removed from the central sanctuary by the Buddhist monks who started living inside Angkor and worshipping there.

Angkor gradually lost prominence and the decline led to the city being abandoned. Though it is said the temple was nearly continuously inhabited by the Buddhist monks. Hinduism gradually declined and was taken over by the rise of Theravada Buddhism, which was followed by many kings afterwards. Theravada Buddhism is the religion of Cambodian people today.

Once you exit the Temple complex you can proceed to Angkor Thom for another very sculptured treat. 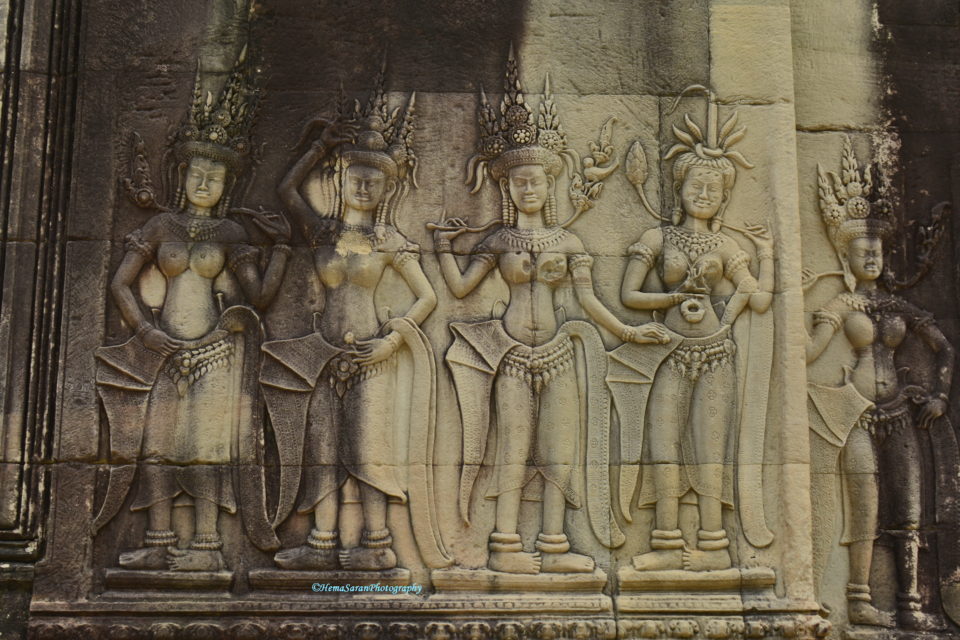 Inscriptions have identified 37 heavens where one sees leisurely pursuits in palaces and 32 hells with scenes of punishment and suffering.

About 6-10 million blocks of sandstone was used to build Angkor Wat.

The actual height of the Angkor Wat from the ground to the top of the tower is 213 meters.

The walls are adorned with 1500 dancing Apsaras. Each one is different from the other.

Important things to know before you go:

How to get there: – Fly into Siem Reap – Angkor International in Cambodia.

Visas : You will need a Visa to get into Cambodia. It is a very easy process thankfully. Please go online , create an account , fill in the form , pay the fees online and the e-visa will be emailed to you. This is the site – https://www.evisa.gov.kh

Stay: There are many hotels very close by to the Temple itself. I stayed in a The Privilege by Borei Angkor which was 2 kms away and they arranged to drop me off to the Temple. http://privilegefloor.com/

Tickets: Please remember to buy ticket(s) at the entrance. You can buy a single day pass, 3 day pass or 1 week pass depending on your itinerary. Please remember to keep the original ticket on you at all times as they will ask for it whenever necessary.

Eat : Cambodian food is one of richest and complex tasting. Try roadside eateries everywhere you get a chance. The best part is no one goes hungry, be it vegetarian, meat eaters or the vegans. There is a perfect Cambodian dish for everyone. Please remember to take bottled water whereever you go.

Best times to go:  November to March is the ideal time to visit Cambodia as there is very little rains and the temperatures are a bit cooler.

Please wear appropriate clothing while visiting the Temples. They do check if arms and knees are covered. So shorts, short skirts and tank tops are not allowed.

It is hot even in colder months, remember to carry sunscreen, a hat and plenty of water.

Use caution when buying foods from roadside vendors, make sure the food is thoroughly cooked.

One thought on “Exploring Angkor Wat”