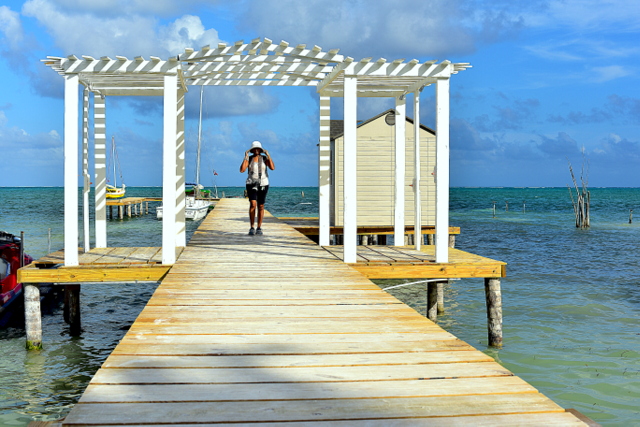 Caye Caulker in Belize, the younger sister of San Pedro, but definitely more beautiful, is an idyllic island about an hour north from Belize City in Water Taxi or a short 15 minute ride through either one of the local flights, Tropic Air or Mayan Islands air. The island itself has a total population of roughly 1200. It has white sands and water is more pristine than San Pedro indicating the less touristy nature. It is a backpackers’ paradise today with affordable stay and food. Also it has couple of local snorkeling places.

Hema and I traveled there during the New Year eve of 2016 from Flores, Guatemala going through an uncomfortable 6 hour journey to Belize City, Belize as we made the mistake of not booking an express bus like Fuente De Norte and had booked Marlin Espadas, a local bus.  I need to point out that the transfer from the bus to the water taxi is seamless as the bus ends its journey in Belize City in the San Pedro Belize Express Water Taxi Terminal.(and this is the same case for Fuente De Norte buses as well). Water Taxi folks will see to that your baggages are checked-in. From Belize City we took the San Pedro Belize Express water taxi in an hour journey to Caye Caulker. Once we collected our bags from the “baggage claim” of the San Pedro Belize Express water taxi, we took a local taxi, a golf cart, to our hotel which was about 2 mins away from the water taxi terminal though strangely we happened to discover later that the hotel we booked was the farthest away from the main area of the island which the terminal was part of.

The place was crowded, due to the New Year celebrations when we descended on the island, with backpackers from UK,US and Canada. And it was a huge turn off on day one, which was the New Year day, as the backpackers were lying down in different piers of the island and it looked to me like watching groups of sea lions and seals in the California beaches. But the crowd left next day and that is when I was able to cherish the character of the island, the slow paced nature of the island. The islanders claim that everything is slow in the island. There are no high rise or luxury resorts and mostly the hotels are backpacker establishments but had enough comforts which should encourage family trips.

We intended to take it easy after the tiring journey from San Pedro, Belize to Flores & Tikal, Guatemala. And we ended up spending the time idly in the lsland cherishing the sea food options it can offer and sit by the beach and drink beer and rum. Caye Caulker has excellent choices for food and being from Iowa, USA which is a meat country, I was happy to devour the fresh seafoods available in large portions. Unlike San Pedro, it is the Belizian cuisine available mostly in the island, though there were food carts selling Pupusas. And in the night, the place smells of grilled seafoods and poultry and many sit on the streets drinking the Belizian rum or Belikin beer and listening to the blaring Reggae music played by the Rastafarian shops. You can see the locals sitting on the chairs and benches with their dogs drinking the rums and happily doing small talks. And that is where one could see the Caribbean lifestyle in its full glory.

Snorkeling/Paddle boating/Kayaking/Canoeing can be done near the area what is called as Split essentially indicating the split of the island into the populated main island and a small mangrove forest filled island. And it is a photographers’ paradise with the beautiful turquoise waters and white sands and numerous piers and some mangrove forests with lots of sail boats. Also the sunrise and sunset is a sight to pay for. Hema and I spent our time taking numerous pictures of the gorgeous sceneries offered by the island though I could not match up her enthusiasm. I took it easy sitting by the pier, drinking rum, taking a massage (should I say I had one of the best massages?), talking to the locals and the backpackers. Though the beaches of Caye Caulker itself is not the best place for snorkeling unlike Turks and Caicos or Aruba, I was able to snorkel and see some star fishes and one poisonous snail (will be updating my Fishes of the Caribbean blog –  https://randomvoyager.com/caribbean/  with the new pictures). And couple of days I went for Kayaking around the smaller portion of the island beyond the split and was able to see few birds like White Ibis . In the evening, we would head out to the other side of the island with its Mangrove forest and would watch gorgeous sunsets with the sail boats adding the scenery.

And I would not do justice to the blog if i do not mention a word or two about the locals. The locals are laid-back, some are Rastafarians, which adds to the color but whoever I met were good natured. That seem to be the gift of the island which is not yet touched by full-fledged tourism.I was snorkeling with Hema when couple of local kids were guiding Hema in her snorkeling and showed her numerous conchs and other fishes. And the kids were very young but were responsible enough to warm me of the poisonous snail which I was holding(another episode of flirting with danger with the poisonous sea creatures after the swimming with the poisonous snakes in Aruba and picture with the poisonous Scorpion fish) And couple of local kids borrowed both Hema’s and my snorkel gears and I decided that I am going to lose the gears to the local kids. But the kids were responsible enough to return both the gears to me which made me feel slightly ashamed but realized the good nature of the locals. Also I observed something i.e most of the retail businesses and restaurants are owned by Chinese and so there were few Chinese locals as well.

How to Get there and get out?

If you are going from flying from USA/Canada or Europe, fly into Belize City International airport From there head to the San Pedro Belize Express water taxi terminal taking a taxi which would set you back by 25 USD.  At the terminal you can get San Pedro Belize Express water taxi to Caye Caulker which is an hour ride. I did not find it uncomfortable traveling in Water Taxi but definitely carry a thin jacket as you might find little chilly. It costs about $20 USD but the agents make it seamless for you right from checking in the baggage to checking out the baggage.

Alternatively take Tropic air or Mayan Island air local flights which would mean after immigration you will go to either one of the gates where these flights operate. And it is a 20 minute short flight from there.

Check the below link for the Water Taxi hours

Book your Water Taxi through San Pedro Belize Express Water Taxi as I felt they make the entire journey comfortable.

I suggest if it is offseason, go to the island and book a hotel room or hostel room or if it a season like New Year eve, book the room well in advance. I stayed mostly in a small boutique hotel called De Real Macaw based upon the reviews from trip advisor and it was well worth it as it is located very near to the Split and San Pedro Belize Express Water Taxi. The hotel would cost you from $30 USD to $75 USD depending upon the type of rooms.

Though most restaurants provide only Belizian dishes and cost the same, I suggest trying out Maggie Sunset Kitchen. A grilled Lobster with two sides will cost you $15 USD($30 BZD – the exchange is 2 BZD to 1 USD) or a grilled Red Snapper will cost you around $11 USD($22 BZD).

Also I suggest trying out the Belizian Jerk dish from Enjoy restaurant next door to De Real Macaw.(being a small island, you do not need directions. Just ask people and they will guide you). We challenged the chef to provide us with the spiciest version he can come up and he came out with flying colors that I ended eating the same dish for the dinner as well but scared my stomach in the process (it is my Indian stomach which got Americanized and lost the tolerance for spicy foods)

For breakfast, we ended up going everyday to the Paradisio Restaurant by the Split to start our day with either the fantastic American or  Belizian breakfasts with a scenic view of the beach.