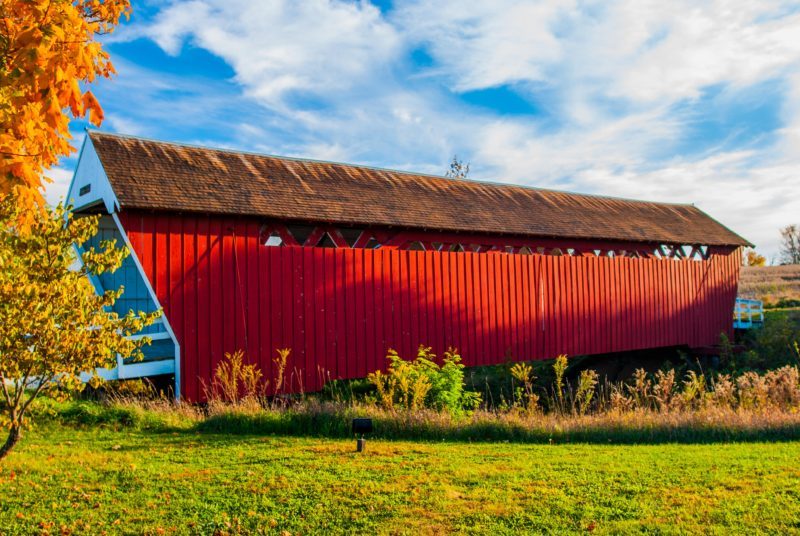 I am a voracious book reader, having started reading Sidney Sheldon at the age of 10 to kill the boredom of having moved to a small town near Pondicherry in India from a cosmopolitan city of Madras (modern day Chennai). But I do not prefer romantic novels. So I was not aware of the significance of the covered bridges of the Madison County in Iowa. My wife, who had got a Rakhi gift from one of her friends, explained to me the significance of the Bridges, which figured prominently in the book and the subsequent movie of the same name, Bridges of Madison County as we were sitting, watching the National Balloon Classic, Indianola, Iowa in 2015. These bridges, about 6 of them, are located about 35 miles away from Indianola and so was the reason, the conversation veered towards the book.

The book is about a romantic story of a National Geographic travel photographer, Robert Kincaid, who comes to Iowa, researching for his photo essay and knocks at the door of the Francesca Johnson’s home to get directions for a particular bridge and later ends up having an affair with this married lady.

So I  traveled from Cedar Rapids, Iowa, which was about 160 miles from Winterset, the city in Madison county, where these bridges were located. It was a day trip on a sunny fall saturday in October of 2015. Winterset is also the birthplace of John Wayne.

Architecturally, all these bridges are covered bridges, made of wood, and supported by mostly Lattice Truss, reinforced by either Kingpost or Queenpost. Roseman covered bridge has a Lattice Truss and reinforced with a superimposed Queenpost Truss, which has proven to be more stable and has elongated the life of this bridge compared to many other covered bridges in Madison county,  which had Kingpost Truss and are already deteriorated. The wooden piers of these bridges were replaced with steel piers for some of the bridges as part of the renovation or replacement. All these bridges were painted outside in red as is the case with many of the covered bridges elsewhere and inside it is painted white providing a beautiful contrast.

The first one I visited was the Cedar Bridge which was originally built in 1883 over Cedar Creek, destroyed in arson, built again in 2004. The one I visited in 2015 was again destroyed in 2017 as per the news. As I could see from a distance, with the water and the changing colors of the leaves on the trees offering a spectacular setting. There were handful of the visitors but taking photos of the bridge without being photo-bombed was not an issue.

The second bridge was the protagonist in the movie, Roseman covered bridge. This was built again in 1883 over Middle river, renovated in 1992. It is placed in the National Register of Historical places in 1976 unlike Cedar Bridge which was removed from the register after the arson in 2002. This is where Francesca leaves a note for Robert, which starts the extra-marital affair. It is not used for traffic anymore as there is a parallel route available. This bridge had an arson attempt but was lucky to stand unlike its cousin, Cedar Bridge. Unlike Cedar Bridge, I did not see visitors, which was surprising for me.

Grabbing a quick lunch in Northside Cafe in Winterset, which is an American joint but a vegetarian friendly and one of the top rated ones, I visited the Holliwell bridge, which again like the Roseman, it has been discontinued for traffic as there is a parallel concrete bridge. This bridge was built on the Middle River in 1880 and renovated in 1995. It is part of the National Register of Historical Places.

The last one I visited was the Imes bridge, oldest of all the remaining 6 bridges but easily the beautiful of all the covered bridges I saw. Probably it was due to the evening sun along with fall colors on the trees with the red color of the bridge but I soaked in the beauty, walking around. It was built in 1870 over Middle river, moved once before it found its final resting place in a small creek near St. Charles, IA. It was renovated in 1997.  I felt this bridge was located in a more urban setting compared to other bridges, which had a rural feel to them. Probably it was due to the reason, this bridge was located close to the Interstate I-35.

Unfortunately I had run out of time due to early fall sunset and had to skip the remaining 2 bridges. As I drove back home, I could not help but ponder over the thought that these bridges, which are part of the National Register of Historical Places, are not well protected as these were prone to arson and also vandalism as per what I saw on the inside of the bridges.