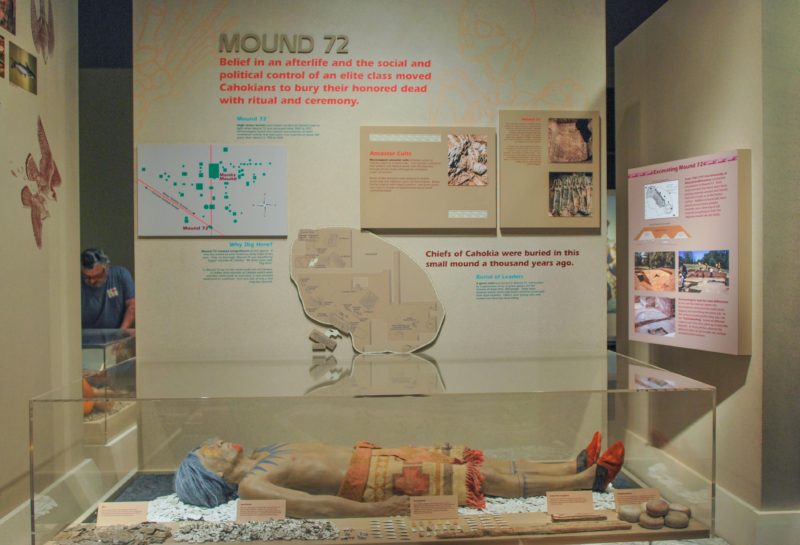 When I lived in Maryland Heights near St. Louis for a few months in 2000, I did not hear about Cahokia mounds across the Mississippi river from St. Louis.  An historical site,  it is also one of the 23 UNESCO sites in USA. I had the opportunity to travel to this place in July of 2015. What I found out was What Chichen Itza and Tikal is to Mayans, Cahokia is to Native Americans, showcasing the sophistication of the Native American civilization called the Mississippian civilization. Cahokia dismantles the popular narrative that Native Americans were primitive. Cahokia shows that the Native Americans were farmers and city planners.  Cahokia is easily accessible from the Interstate I-55. Before I dwell further into my experience, a brief background.

Cahokia was a Native American civilization which flourished between 700 CE & 1400 CE which developed along the Mississippi river & specialized in Mound building. Cahokia is the largest such civilization at the location of today’s Illinois, USA  The civilization spread from Mississippi river to Tennessee river and is believed to have had trade network all the way to Mexico. Construction of pyramidal mounds on which there might be settlements or burial groups signify this civilization. Cahokia at its peak had 20000 people living and occupying 4000 acres. It is a chiefdom society with about 120 mounds and outlying hamlets and villages. The hamlets and villages was spread across both sides of the Mississippi river including the modern day St. Louis. Many mounds were flattened in constructing the city of St. Louis. So it was previously called as Mound city.  Many of these mounds are used for ceremonial purpose and some mounds were used as Necropolis. Cahokia was surrounded by four 2-mile Palisade walls called stockade walls. People used woodhedge based calendars & sunrise at different times of year. The Native American game of Chunkey was first played in Cahokia. The game involves warriors rolling a disc shaped stone and throwing spears so that the spears are nearer to the stone, when it stops.

The largest of the 120 Mounds is the Monk Mound. Monk Mound got its name from the French Trappist monks who lived near here for sometime in 18th century. The Cahokia chieftain  monitored the whole Cahokia from the Monk Mound. It is about 100 feet high (30 meters), 950 feet in length (290 meters) and 836 feet in breadth (255 meters) and covers about 14 acres of space.

The other significant Mound is the Mound 72 which served as the royal necropolis.  It is about 1/2 mile from Monks Mound. Archaeologists founds the remains of a man in his 40s and considered to an important Cahokian leader as per the materials found near him including sacrificial victims and arrow heads. It may have served as a mound for human sacrificial rituals as per the excavations. The leader was buried on 20,000 marine shell beads arranged in the form of a Falcon, an important motif in Native American culture.

I made a trip to St. Louis and added Cahokia to my itinerary. As I drove from St. Louis and pulled in to the parking lot near the Monk Mound, I can see people jog to the top of the mound, some going through the routine several times. As I walk around, The open space and  the air provided me with a serene atmosphere as I tried to visualize the glorious period of the Native American culture. From the Monk Mound, the skyline of St. Louis is visible with the Arch providing a grand spectacle.

I walk outside, thoroughly satisfied with the trip to Cahokia when I walk across the interpretative Center which has an open field with the Native grass and the pond and the blue skies providing a contrast thoroughly satisfying the photographic appetite in my wife, who was with me throughout the trip.

Amazed with the astronomical and cultural refinement of the civilization and with a renewed respect for the Native American civilization, I returned back  to St. Louis for a night of the July 4th fireworks.