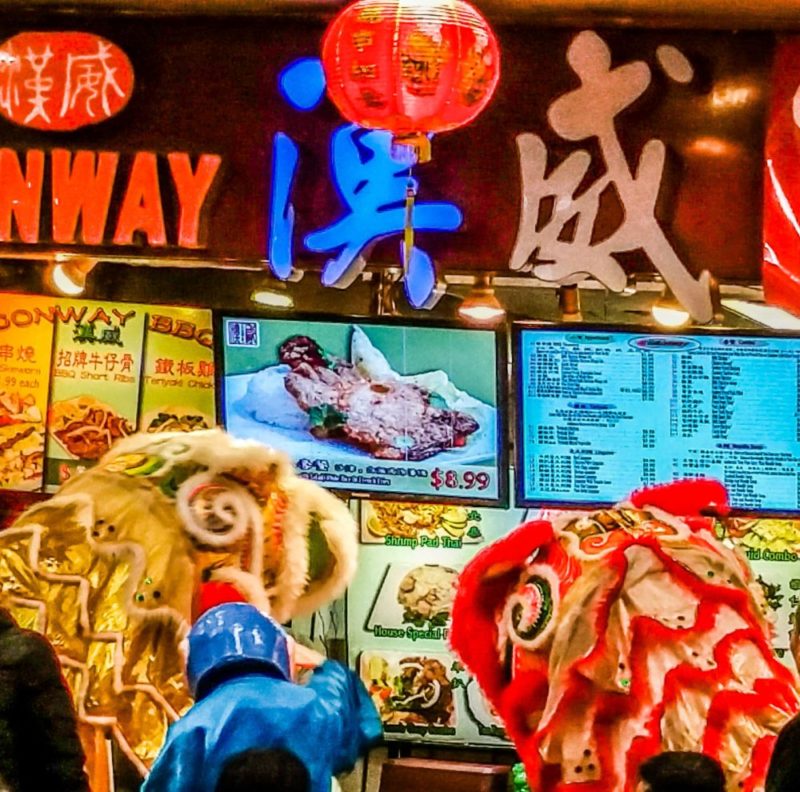 As I sat with my brother and a friend of mine in the foodcourt of the New World Mall, Chinatown, Flushing, Queens in New York, I saw groups of Chinese wearing Lion masks and dancing to cymbals and gongs visiting the stalls bringing in the good luck. It was January 29th of 2017, the 2nd day of the Chinese Lunar New Year. The foodcourt which consists of Chinese, Vietnamese, Japanese, Korean food stalls were filled with empty seats difficult to find. Chinatown in Flushing is a fast emerging Chinatown quickly eclipsing the one in Manhattan near Canal street and very vibrant (read about it here in detail  –  https://randomvoyager.com/queens/)

The Chinese New Year,  begins on New Moon between January 21st and February 20th of every year. Nowadays the Chinese celebrate the New Year to honor the deities of the heaven and earth and also their ancestors. In China, it causes one of the largest human migrations from cities to the villages. Many Buddhists believe that the first day of the new year is also the birth of Maitreya Bodhisattva, the Buddha-to-be.

Chinese New Year is called Guo Nian meaning the victory of the people over Nian.

Nian is a Chinese mythological giant creature which lived in the mountains or under the sea and would come down to terrorize the people, even kill them and destroy the crops.

People found out that the beast was terrorized by bright red lights, red color and loud sounds. So people would burst crackers, light red lanterns and do the lion dance accompanied by drums, cymbals and gongs to scare the beast.  Nowadays  Lion dancers visiting different shops bring in good luck during the Chinese New Year. Sometimes the costumes worn during the Lion dance might mimic Nian.

This Chinese New year, being the year of dog, is  celebrated at Flushing Chinatown with a Lunar New Year parade on Feb 17th between 11 am and 12 pm starting at  at 36-99 Union Street
Flushing, New York, United States.

There are few hotels which are there in the heart of the Chinatown – Ramada in Prince street, Best Western, Sheraton are some of the options. It is not unusual for room tariff to go high for the weekends and especially during the Chinese New Year.

Do note many restaurants are open on the Chinese New year.

There are many restaurants in Chinatown offer Bring Your Own Liquor (BYOL) which is convenient if you want get togethers.

Do make use of the $30/hour massages while you are there.

Also get a haircut and excellent shampoo wash with massage for just $10 in many of the shops in Chinatown.

One thought on “The Legend of Nian”