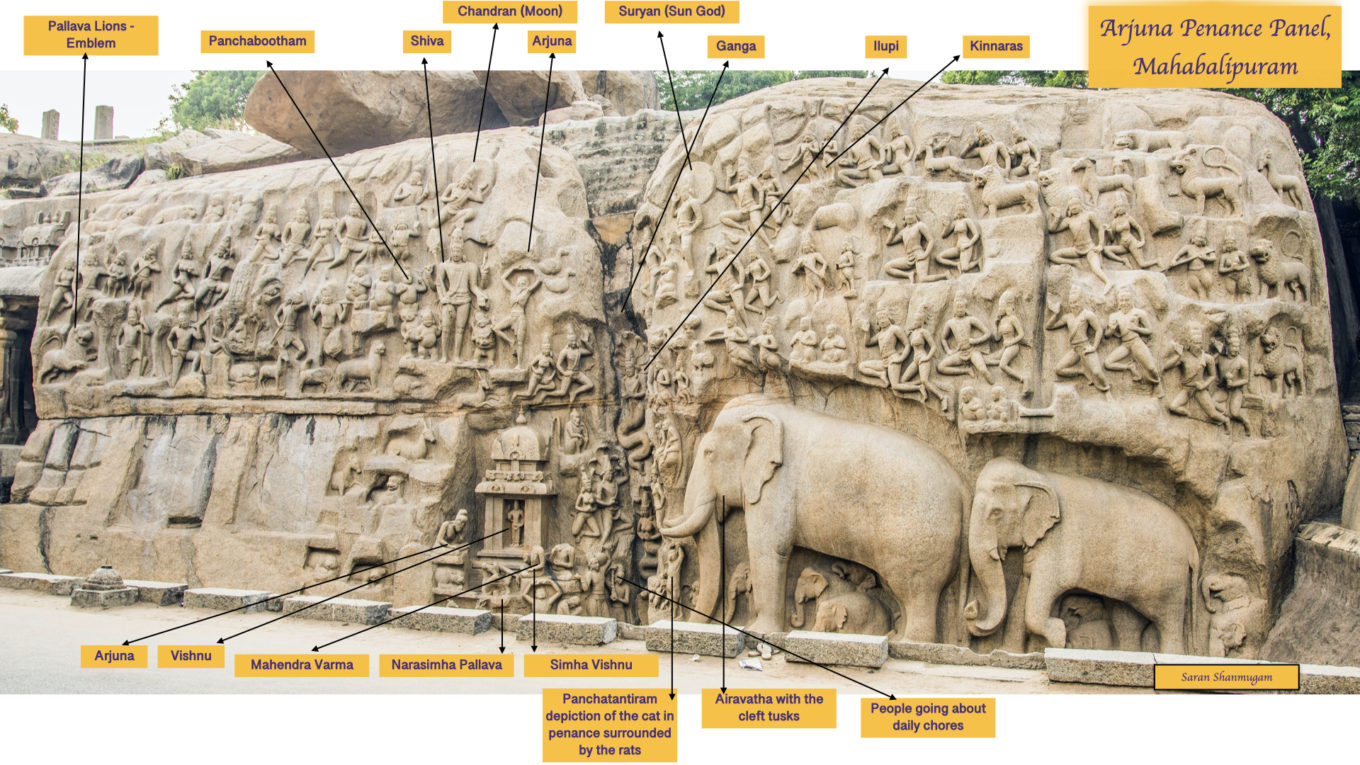 The bas relief is not perfect but the carvings were intricate. The overlapping themes makes it even more exquisite. But it was flawless when it was created. The invader had selectively removed the heads of 3 men from the panel but leaving the major portion of the panel untouched. Perhaps he found it was too valuable a creation to be destroyed, even if he was within his rights to do so. His capital was destroyed completely a century back and he was hell bent on seeking vengeance. But the sight of the panel might have convinced him not to. But my personal view is the invader was always generous even otherwise. That generosity is what prevented the panel from being destroyed.

This is the Descent of the Ganges or Arjuna’s Penance or the descend of the Pallavas from Lord Vishnu panel in Mahabalipuram or Mamallapuram, the city which epitomizes the Pallava architecture. Mamallapuram was a major port for the Pallavas and the monuments were created in the 7th and 8th CE. The invader who let the panel survive except for those 3 headless men was Vikramaditya II, descendent of Pulakesi II, the great Chalukya emperor. His capital, Vatapi, was ransacked during his father’s period by the legendary emperor, Narasimha varma Pallava,  who created this rich artifact of a city.

Experts themselves are split as to what theme this panel allude to – Arjuna’s Penance or Bhagiratha’s Penance to bring Ganges or does it depict both the themes with few other sub plots as well? Some say the theme represents the Narasimha Varma Pallava himself and the descent of his Pallavan clan from Lord Vishnu himself depicted in a symbolic descend of the Ganga.

The panel is spread on 2 pink granite rocks separated by a cleft. The panel itself is 25 meters in length and 12 meters in height and is displayed in the open air.

The emperor, Narasimha Palllava himself is depicted sitting in front of the Vishnu in his temple in a Yoga pose with Yoga Patta, a Yoga band around the waist and legs. The emperor is headless, courtesy of Vikramaditya II. On the right in a slightly elevated position, are 2 headless people, who are the emperor’s father, Mahendra Varma Pallava and his grandfather, SimhaVishnu.

And Arjuna himself is there with his skeletal figure due to the penance and Lord Shiva with his right kind symbolically depicted providing the Pasupatham Astram to Arjuna.

And the river Ganga herself is descending in the cleft between the 2 rocks from the Jadhamudhi of Shiva. The presence of cistern on top as per archaeologists shows that the water might have been flowing actually through the cleft during the emperor’s time.

The bunch of elephants with their little ones are carved beautifully. But the front elephant with its clefted tusks shows it is Airavatham, elephant of Indira. In front of Airavatham is the depiction of the Panchatantra scene with the cat in a penance and the rats around the cat. The Pallava lions are depicted all around the panel.

I had sat there for hours due to the fascination for this piece of Bas Relief when I was young though I grew fond of the city itself  having grown up reading Sivagamiyin Sabatham, Kalki’s epic novel about the Pallavas.

Location of the Panel:

2 thoughts on “Descent of the Pallavas”